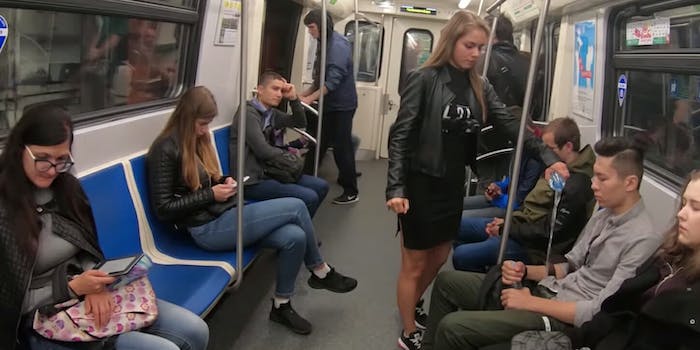 The so-called 'bleach' was just water.

A 20-year-old law student claimed to be taking it upon herself to deter the subway manspreaders of St. Petersburg, Russia—by pouring bleach onto their crotches.

The Daily Mail reports that Anna Dovgalyuk is the young woman who denounces the “disgusting” act of manspreading in a video posted to YouTube on Tuesday.

“This is my new video manifesto, dedicated to the problem of manspreading,” Dovgalyuk says in the video. “Men demonstrating their alpha-manhood in the subway with women and children around deserve contempt. If you publicly show what kind of macho you are, we will publicly cool you off!”

By cool off, Dovgalyuk means pouring “about 30 liters of water mixed with 6 liters of bleach” into the laps of any man she catches with his legs too wide on public transportation. A video showed this in action: Dovgalyuk poured liquid from a water bottle onto unsuspecting men, horrifying them and onlookers. According to the video, she doused 70 men total.

The idea is to give the manspreaders a huge crotch stain marking them for their misdeeds. The video claims that the bleach solution is “30 times more concentrated than the mixture used by housewives when doing laundry. It eats colors on the fabric in a matter of minutes, leaving indelible stains.”

Per Daily Mail, a Russian news outlet accused Dovgalyuk of using actors for the stunt. But she reportedly denied the claim and added that she has not been sued by any of the real men she showered in bleach.

Manspreading isn’t just a problem in St. Petersburg. From India to Madrid, public transportation systems the world over have tried to discourage men from the irritating practice. In 2014, men’s rights activists were outraged that New York City’s MTA rolled out a “courtesy” campaign asking passengers to use only one seat.

Update 3:01pm CT, Oct. 2: According to Irish entertainment news website the Daily Edge, Dovgalyuk’s now-deleted video has been debunked as a staged production.

The publication reports that an actor featured in the video, Stanislav Kudrin, wrote on Facebook that it was produced by My Duck’s Vision, a company known for creating viral content.

“They poured water on us […] Naturally, staged,” Kudrin reportedly wrote. “That feeling when you come to the shooting with two spare pants and leave with a salary.”