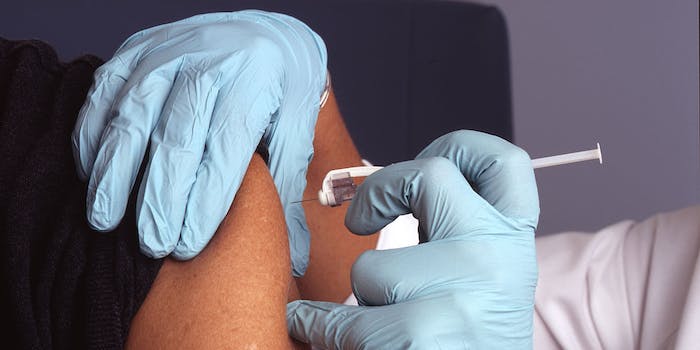 Taking a look at the gray lining of this silver cloud.

Health officials declared rubella—the “R” in MMR vaccine—eradicated in the Americas this week. Rubella is generally a mild and non-deadly virus but it can have serious complications for pregnant women and infants. Health officials cited the widespread use of MMR (measles, mumps, and rubella) vaccines as the driving force for the virus’s elimination from North and South America.

This is a public health triumph. Say it with me now: thank you, vaccines! Rubella can now join the ranks of smallpox and polio for diseases North and South Americans needn’t worry about. Many took to Twitter to celebrate this victory of modern medicine.

But anti-vaxxers could ruin everything.

To be clear, anti-vaxxers are still very much a tiny contingent of really loud voices. Most people vaccinate their children on the proper schedule. As long as there is a large enough percentage of vaccinated people, then that should be enough to achieve herd immunity, a situation where viruses can’t spread very far because most of the population is immune. For highly infectious diseases like measles, researchers estimate that 90 to 95 percent of the population needs to be immunized. Those estimates get a little more complicated depending on population dynamics, so generally the more people immunized, the better, especially for the protection of children who are too young or unhealthy to be vaccinated.

You might think more anti-vaxxers would be changing their tune in light of the obvious continued benefits of vaccines and the fact that every point “against” vaccination (autism, mercury poisoning, delayed scheduling) has been refuted, but you’d be wrong. People so passionately devoted to their beliefs don’t let up easily. Science sides with anti-vaxxer psychology, if not ideology.

Research shows that giving anti-vax parents fact-based pro-vaccination literature based off information from the Centers for Disease Control (CDC) actually causes them to dig their heels in deeper. This is a psychological phenomenon called the Backfire Effect and it’s part of a whole family of psychological pitfalls that make it so infuriating to argue with someone whose beliefs are different from yours.

Worse yet, parents on the fence about vaccinations may fall prey to confirmation bias, the tendency to seek out information that aligns with your preconceived thoughts and beliefs. The echo chambers of social media we build around ourselves don’t help. It’s too easy to unfollow people who are saying things you don’t like and to click on all those articles whose headlines are hinting at something you felt like you knew was true all along. And with algorithms automatically tailored to your ideological, political, and consumer habits, even purposefully seeking out contradictory beliefs becomes challenging.

Don’t worry about trying to circumvent your Google algorithm so you can start to right your misconceptions; someone’s already done the work for you.

Last February, journalist Tara Haelle published a three-part series in Forbes in which she tackles 15 myths about anti-vaxxers one by one and sets the record straight, citing multiple scientific studies. Go forth and arm yourself with knowledge, because perhaps if pro- and anti-vaxxers can understand each other a little better, we can all move forward to better public health.

Photo via Rhoda Baer/Wikimedia (CC BY 2.0)