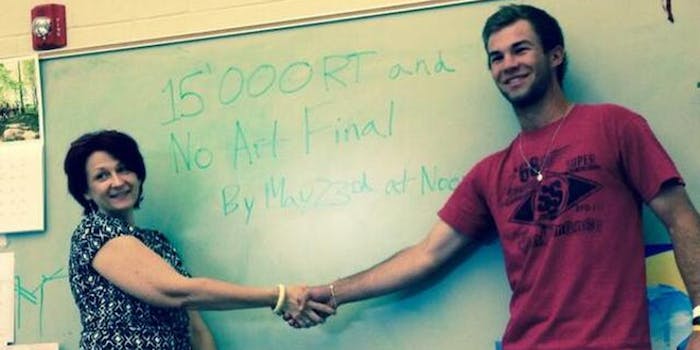 Forget studying—students hope 15,000 retweets will get them out of finals

It’s finals season, and high school students across the country are cramming the only way they know how: By making bets with teachers that if they get a certain number of retweets, their final will be canceled.

Yes, the latest teen Twitter trend involves retweets, handshakes, and flimsy social media deals. Andrew Muennink, a senior at Round Rock High School in Round Rock, Texas, was apparently the patient zero for this stunt. On May 7, he posited that if he got 15,000 retweets by noon on May 23, his teacher would cancel their art final.

Despite the fact that this is an art final we’re talking about, he of course got 15,000 retweets. These are the causes the Internet loves to get behind. Then teen Twitter jumped on the trend, as several photos of students making similar “deals” surfaced.

If we get 15,000 retweets we don’t have to take the chemistry final. pic.twitter.com/ofzNhIBkDy

if we get 5,000 retweets, no Julius Caesar final! EVERYONE RT PLEASE. pic.twitter.com/Qv0LN1aZDA

It’s interesting to see how super casual the relationship between students and teachers has become. Muennink told ABC News, “I think [other schools] should [do this] because it’s really cool how Twitter can be an influence.”

“We are very disappointed in the fact that abcnews.com did not do any fact checking regarding the Round Rock High School exam story. Our local media is committed to working with us to ensure responsible journalism. The art students at Round Rock HIgh School will be taking their final exams at the end of the month.”

Harsh! There’s no evidence that any other teachers followed through on their pacts. Hopefully Muennink continues to develop that entrepreneurial spirit in college, though. He’s already attempting to dismantle the shadowy public school PR industry, but what if this Twitter stunt was basically a form of meta performance art. What if it was his final?

I’m so pissed that @RoundRockISD is lying to reporters saying that it was a joke? Stop lying to the media to cover your asses!!