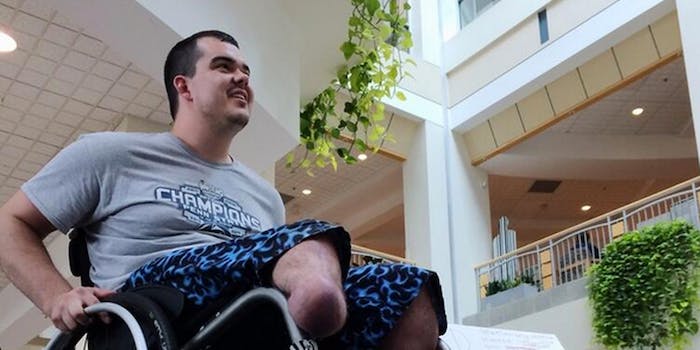 In a feat of endurance that’s sure to stand the test of time, Penn State senior Ross Holland has surpassed the Guinness World Record for the longest stationary wheelchair wheelie.

Holland blew past the previous record-holder’s 10-hour mark on Monday, but he didn’t think twice about stopping there. “I want to be there for days,” he told Onward State. “I don’t want anyone to break this for a while.”

The wheels won’t come down until 3:45pm EST today, exactly 50 hours after he assumed his tilt in the HUB student union building.

Ross has decided to call it at 3:45pm, the 50 hour mark. In the meantime, feel free to swing by! #wheelsupfor50

In the meantime, Holland has watched the entire Lord of the Rings trilogy, chatted on the phone, tossed a Frisbee around, and enjoyed the fond company of many supporters. (He’s also been giving some free wheelie advice, in case you want to try this at home.)

[email protected] “The key is becoming comfortable resting your center of gravity over two moving points, only one of which you control.”

Follow the final stage of Holland’s stunt by way of the livestream below, and be sure to tune in when he touches down this afternoon. This is college, so it’s sure to be a great post-game party.