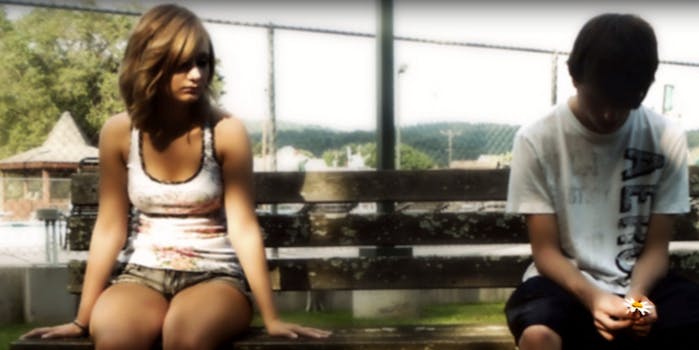 Social media always kicks you when you're down.

This past July, a study claimed that heavy Twitter use could be detrimental to a marriage. Could the dissolution of a romantic attachment likewise affect one’s standing online?

A new paper, “From ‘I love you babe’ to ‘leave me alone’—Romantic Relationship Breakups on Twitter,” suggests not only that a decrease in cross-messaging on the social media service can be indicative of an impending split, but that the event itself predicts a loss of followers.

The “previously undocumented phenomenon of ‘batch un-friending and being un-friended,’” wrote researchers from Aalto University, Qatar Computing Research Institute, and the University of Michigan, entails “sudden drops of 15-20 followers and friends”:

“After the breakup, we were expecting partners to potentially unfollow each other but, apart from that, we were expecting ‘business as usual’ as far as the social network was concerned. However, when we tried to quantify our hypothesis that there should not be ripple effects affecting other connections, we found evidence for the opposite.”

The dip in followers (20 on average) could be a reflection of the tendency for friends of a couple to take sides when the two part ways, though the study’s authors don’t speculate on the phenomenon. Another possibility is that the marked increase in depressive tweets after a breakup—especially from the “rejectee”—drive otherwise contented followers off.

Either way, it’s a confirmation of what you’ve always suspected about your circle of friends on Twitter: When push comes to shove, they’ll abandon you and sprinkle their favs elsewhere.