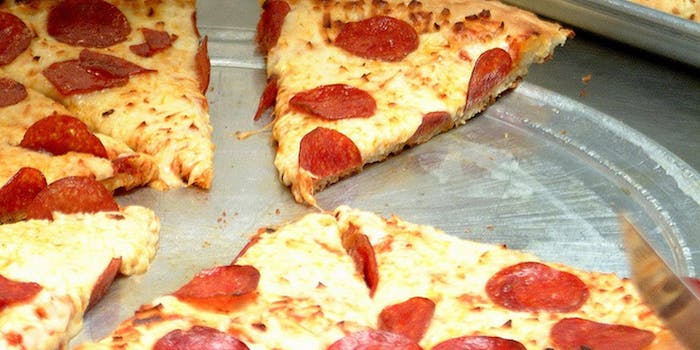 One restaurant in Tucson had some opinions about the bill’s backwards logic.

On Wednesday the Arizona Senate passed a bill that would allow business owners to discriminate against members of the LGBT community. Under the bill businesses could legally refuse gay and transgender people service, under the guise of religious freedom. Yesterday, the Arizona House also approved the bill. It’s now up to Gov. Jan Brewer to sign it into law or veto.

One restaurant in Tucson had some opinions about the bill’s backwards logic. Rocco’s Little Chicago Pizzeria tweeted out this photo last night, offering their stance on the issue:

Funny how just being decent is starting to seem radical these says. pic.twitter.com/ygZcMDlgEX

On the Rocco’s Facebook page, they further explained the photo:

“As a longtime employer and feeder of the gay community, Rocco’s reserves the right to eject any State Senators we see fit to kick out. That is all.”

This bill not only discriminates against LGBT patrons of businesses, it could also be used to target gay and trans employees. Members of the LGBT community often face discrimination in terms of employment, housing, and healthcare, and this wide-sweeping bill just makes it that much easier. As for the sign, Rocco’s owner Anthony Rocco DiGrazia told Huffington Post a customer posted the photo to his Facebook feed, and he printed it:

“The response has been overwhelming and almost all positive from across the globe. I just want to serve dinner and own and work in a place I’m proud of. Opening the door to government-sanctioned discrimination, regardless of why, is a huge step in the wrong direction.”

They also tweeted out some of their favorite comments:

Top FB Comment: ‘Being a legislator is a choice’

Rocco’s will likely see an upswing in business this weekend, and people on Twitter have been applauding the restaurant’s stance.

@tucsonpizza Promise to pay a visit if I’m ever in Tucson. You guys rock. #Equality

Thank you @tucsonpizza for standing up against the hateful & bigoted SB 1062. Great to see the positive response to your sign! #EatAtRoccos