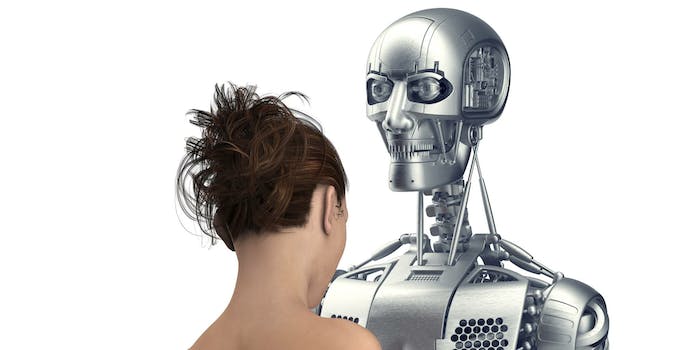 Are you ready for a 'digisexual' relationship?

With sex robots constantly making the news, it’s easy to think that we’ll all be getting down and dirty with some high-tech partners in the future. But a new survey shows that a surprising number of young people are cool with that, and think having a relationship with a robot will be totally NBD. A massive international survey by Havas, a multinational advertising and public relations company, asked over 12,000 people globally about their relationship with technology. And though some of the answers weren’t surprising (27 percent of people think they’re a slave to their smartphone), I didn’t expect so many people to be totally cool with the idea of their friends dating robots. The survey found that 25 percent of millennials thought that, in the future, it will be totally normal for people to have intense friendships and even romantic relationships with a robot.

“The Havas study is indicating that younger millennials have decided to reduce a level of anxiety in their lives: relationship, family and the financial commitment needed to maintain the two,” Clarissa Silva, behavioral scientist and author of the relationship blog, You’re Just A Dumbass, tells Bustle. “AR provides a method of constructing a better reality devoid of human interaction. Millennial men reported higher dissatisfaction with being single, while millennial women reported higher levels of rejection while using online dating apps. The very technology that is designed to create higher connectedness and yield more efficient results-driven solutions are failing many. Opting for a digisexual preference is an extension of what is currently happening in our modern dating world.”

Although, interestingly, men were more open to the idea than women. But maybe that makes sense, because women tend to look for something different from their tech.

Alicia Sinclair, founder of female-oriented sex toy lines b-Vibe and Le Wand and a certified sex educator, tells Bustle that “women are really focused on getting products that provide them with an experience and not a replacement for something”, which may be why we’re more skeptical of robot partners. Here’s what the survey found, humans dating robots could happen sooner than you think.

1) A Quarter Of Millennials Think It Will Become Normal

Yup, 25 percent of millennials thought that it would be normal to date a robot in the future. I don’t know how far in the future we’re talking here, but I guess it’s not hard to imagine that someday that will be the case. Although, interestingly the number was slightly lower — 20 percent — when looking across all age groups.

2) But Other Ages Were Less Convinced

Perhaps unsurprisingly, as younger generations are often more comfortable with new technologies, older age groups were not as convinced as millennials about robot relationships. In fact, only 18 percent of Generation Xers and 10 percent of Boomers thought that it would become normal.

This was really interesting — and really telling. The number of people who thought they could have a relationship with a robot was much lower than when asked about it generally. Only 12 percent of millennials thought they would be open to it. So we may think it’s cool for other people — or at least, it will be someday — but we were less convinced when it came to ourselves.

We may think robot-human relationships are on the horizon, but maybe that’s because a surprising amount of people think humans and robots will become indistinguishable. Four in 10 millennials thought that would be the case. To me, that’s way scarier than dating them, but maybe I’m just being naive.

The idea of dating robots might totally horrify you or pique your interest, depending on how you feel about technology generally. But this survey seems to show that, even if it’s not the norm yet, a lot of us are open to the idea that it may become the norm someday. When will that day come? Well, we’re just going to have to wait and see.