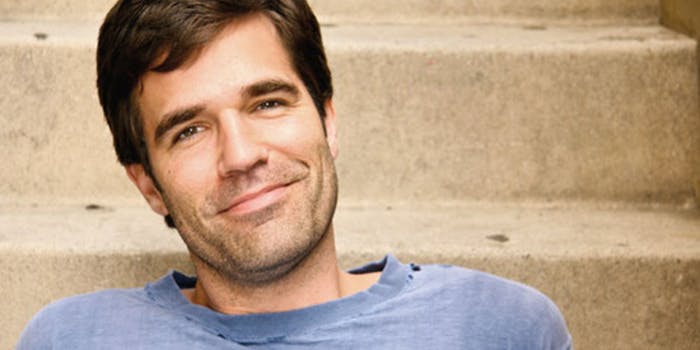 Rob Delaney to the Daily Dot: “I had to be good at Twitter”

The affable comedian sounds off on his humble beginnings, Twitter joke thieves, and why Jerry Seinfeld doesn’t need to tweet.

Rob Delaney shudders to think where he would be without Twitter.

“I couldn’t afford food or pants; it was pretty bleak,” Delaney told the Daily Dot about his life before tweeting, without any trace of irony or humor.

“The Internet, for me, has functioned as sort of a spaceship that travelled at warp speed and took me to galaxies that I would have not previously been able to get to or would have taken a lot longer to get there.”

Three years ago, Delaney was just another struggling comedian, grappling with poverty on the comedy circuit in Los Angeles, Calif. Then he found an alternative avenue for his witty social commentary, one that helped in forge instantaneous connections around the world in 140 characters or fewer.

“I didn’t have a pot to piss in,” Delaney recalled. “I had no choice: It was either success or failure. I had to be good at Twitter. I just worked on it all the time.”

The practice paid off.

Delaney has developed a distinct voice on the microblogging platform. His jokes are usually profane and filthy, yet unlike many shock comics, his humanity often shines through in tweets like this one, which picked up more than 7,800 retweets: “I love gay people. Or as I sometimes call them, ‘people.’”

After more than 9,000 tweets, Delaney was named the Funniest Person on Twitter at the 2012 Comedy Awards, thanks in no small part to his 473,000 devoted followers. The 35-year-old comedian’s now written a book, created a pilot episode for a Comedy Central TV show, and performed a bunch of sold-out stand-up shows.

Ahead of his appearance at Montreal’s Just for Laughs comedy festival, the Daily Dot spoke with the affable Delaney about his humble beginnings online, Twitter joke thieves, and why Jerry Seinfeld doesn’t need to tweet.

Daily Dot: Why did you decide to join Twitter?

“Really just because everybody else was. It was a bandwagon thing where like everybody else was jumping off a bridge. I decided to jump off too. I didn’t think it was anything special in the beginning. I just really enjoyed being able to have my jokes immediately read by people so I kept doing it.”

DD: When did your account start taking off and when did people really start noticing what you were doing?

“The first big famous person to retweet me with any regularity was Graham Linehan. He was the first person to kind of champion me to others. Not too long after that, I started getting work, once I was getting up into the tens of thousands of followers. People started to know who I was, and then it just took off exponentially after a certain point.”

DD: How do you think Twitter has informed your comedy writing? Do you find yourself writing more concise jokes in general now?

“Not for stand-up. Although there’s overlap in subject material in my longer-form writing and what I tweet about, I still am much more story-based for my stand-up. I guess I know how to hit harder on punchlines because of Twitter. I’ve never been a one-liner comic. Twitter has not changed that.

“If you’re better at short-form comedy, you’ll be better at long-form comedy. It’s all interdisciplinary; it all informs each other. Although I might not explicitly see the connection, I’m sure it’s there.”

DD: How much crossover do you think there is in the material between your Twitter account and your stand-up?

“If we’re going to say percentage-wise, it might literally be one percent. It would be a tiny amount. Thematically, it’s probably a lot higher. I tweet about bodies, sex, relationships, fears, and foibles, and that’s what a lot of my stand-up is about. Content: very little. Theme: very high.”

DD: Do you think you’re funnier on Twitter or in stand-up?

“Probably stand-up. With stand-up you can really just physically assault people with humor. If they’re really laughing at that then they might throw up or wet themselves. I’m able to elicit more full-body laughter. Most people other than myself who’ve commented on one or the other have said that my stand-up is funnier. You can only laugh so hard at 140 characters, you know?”

DD: Do you enjoy stand-up more?

“Definitely, absolutely. I love Twitter, but it’s just a tool. Twitter helps me become a better writer, and if it leads to other opportunities, that’s wonderful.”

DD: Why do you think there are some very funny comedians, such as Jerry Seinfeld, who are great at stand-up or on television, but are really awful at Twitter. Do you think it’s a generational thing?

“Let’s not take Jerry Seinfeld as an example. I’ve read some funny things that he’s tweeted; I follow him, and I laugh at some of his tweets. The thing is, he doesn’t have to be funny on Twitter. He’s a multimillionaire. Where’s the incentive? The argument could be made that he’s done perfectly well for himself, and so why bother tweeting?

“I’m sure if Jerry Seinfeld worked on it at all, he’d be amazing. He just doesn’t have to. For me, operating from a place literally of poverty, it was by necessity that I became good at Twitter.”

DD: How much work would you say you put into Twitter each day or into each tweet?

“If you find that you’re putting really much work at all into it, then your tweet probably won’t be that funny. It’s got to come from a place of comfort and ease. It’s painful as an audience member to watch a comedian contort and try to wedge together a lousy joke. If it seems like it just came off the top of their head, that’s when you really laugh, even though it might not have.

“There has to be sort of an elegance or a grace to your tweets, even if they’re about farts.”

DD: You’ve had a few problems with plagiarism lately, with Evil Milk and 9GAG stealing some of your jokes and using them without credit. How do you feel about the ownership of jokes and attribution on the Web and Twitter?

“If it’s something really specific… that 9GAG thing was a very specific wording. That was just blatant theft. Really, that just makes them look like assholes. They look like jerks. I’m flattered. I get publicity out of it. They just lose across the board.

“Joke theft happens. It’s wrong, but if you do it to me, I’m just going to write more jokes. It just motivates me to work harder and better and more. It’s patently a bad thing, but it’s also going to happen so you don’t want to get your panties in a knot over it.”

DD: How do you think Twitter, YouTube, Tumblr, and other Web communities are helping push forward the current and next generations of new comedians?

“I was going to say humor is as old as fire, but it’s probably older. These are just the tools of today. A hundred years ago, we couldn’t make movies. Now you and I can make a movie on our laptop. Ten years ago, we didn’t carry around smartphones in our pockets that could grant us instantaneous access to amazingly written comedy from around the globe via Twitter. The thing that made you laugh isn’t the celluloid that film was on or the cell phone technology; it was the humanity of the joke that it delivered. It doesn’t really matter how a laugh gets to you.”

DD: I agree. Perhaps it’s easier for really good, talented comics to get noticed and recognized now more than it used to be.

“That’s a good point. It is more of a meritocracy… [@IamEnidColeslaw] is an amazing tweeter who lives just outside of Chicago. She’s this young woman in her twenties who’s just amazing. I think she works for a veterinarian. There’s no reason we should know who she is, but something like 50,000 people hang on her every tweet because she’s so amazing. Previously, we would not have known about someone like her, so that’s a very big positive of today’s technology.”

DD: How do you feel other comedians or funny people in general on Twitter are pushing you to be funnier and better?

“You can’t really rest on your laurels in either stand-up or on Twitter. There’s always thousands of funny people out there. People’s appetite for humor is insatiable. If you don’t stay sharp, if you don’t try to push and look for the joke that isn’t lazy, then other people are going to get the attention.

“I love that there are so many funny people out there because it drives you to be funnier and funnier. I think it’s a massive positive. I love finding new funny people, both because I enjoy reading them and they drive me to try and be funnier.”