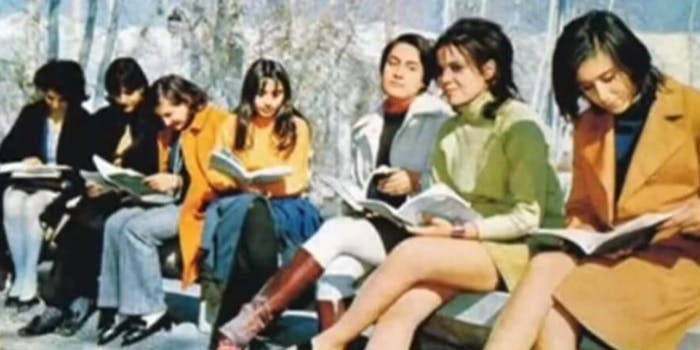 Starting a war has never had sexier consequences.

In recent days, conservative accounts have started sharing photos of women in Iran before and after the Islamic revolution of 1979. In the before pics, sexy women cavort about happily; in the after photos, they are clad in burqas and hijabs.

The photos seem intended to remind people of the glory days when all could feast their eyes upon a sexy skin buffet before Iranian women were required to cover up. Miniskirts! Bathing suits! Oh my.

It's not the people that hate America, it's the mullahs running the country. 1970s Iranian magazine cover: pic.twitter.com/b2GHqZsWRQ

Iran Before and Iran After.
I believe the vast majority of Iranians want to be free again. pic.twitter.com/aRZPGbRhPt

just a reminder of what iran and it’s culture was before vs after the revolution pic.twitter.com/vB5pEwirni

Women in Iran before and after extremists decided that women have no rights. Women should be revered in a society. Not punished and have all freedoms stripped. pic.twitter.com/ASU3vHHoXL

"Some changes are not pleasent"!!!
Unfortunately some people won't understand !!!!!

Same with Afghanistan.
Afghan women of the 60s pic.twitter.com/LThRN0VemT

Iran before and after the Islamic Revolution in 1979 pic.twitter.com/CkeGoxVqye

The thirsty photos of scantily clad ladies have some wondering if those posting them are implying that the U.S. should go to war with Iran. “Omg they wear the hijab there, let’s go free them guys, look how oppressed they are,” remarked one.

“A lot of well-intentioned idiots have outed themselves as clueless with some of these ‘before/after‘ posts on Iran. Sharing vague portraits of Arabic & Muslim women as a ‘gotcha’ tweet is a desperate & illiterate take,” said @DarkoftheWeb.

Others were just creeped out, though a few made the salient point that a miniskirt alone does not equate gender equality. One noted that prior to the Islamic revolution, Iranian women were legally prohibited from wearing Islamic head coverings under a 1936 decree known as Kashf-e hijab, so technically both regimes governed how women dress.

Not gonna lie, these “Iran before/after” pics are really creepy. 90% of them are just “look how western and sexy the women looked they compared to now!”
A woman’s freedom should be more than dressing in a way men find attractive

I'd like to actually see a more enlightened discussion around these Before/After photos of women other than just "Look No Veil, therefore women are free!"
Like what were the social conditions in Iran prior to the revolution for non middle-class women? https://t.co/6vfu0shFta

“Hey, everyone, big news. I saw a tweet on here with two completely contextless pictures of women and I’ve changed my mind about whether we should go to war with Iran based on which picture I can whack off to,” tweeted @markpopham. “Incredible conservative argument from our greatest minds.”

Some might say that if the U.S. goes to war with Iran because of, well, bikinis, it wouldn’t be the flimsiest excuse it’s ever used to justify military intervention.