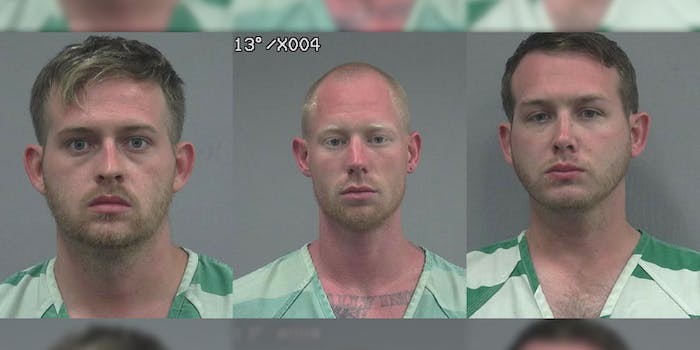 They allegedly shot at anti-Nazi protesters.

Three men who attended white nationalist Richard Spencer’s speech at the University of Florida have been arrested and charged with attempted homicide in connection to a shooting that followed.

According to a statement released by the Gainesville, Florida, Police Department, 28-year-old Tyler Tenbrink of Richmond, Texas, and brothers 28-year-old Colton and 30-year-old William Fears of Pasadena, Texas, engaged in an argument with protesters following the speech.

The men had driven up to the protesters in a silver Jeep and made threatening comments when Tenbrink pulled out a handgun and was encouraged by the Fears brother to shoot at the protesters.

According to the Gainesville Sun, the group of protesters were not actively protesting, but had been sitting at a bus stop and carrying anti-Nazi signs after the protest. One of the men in the Jeep began cheering and chanting about Adolf Hitler, while another asked the group if anyone had “seen Kyle,” an apparent allusion to the Nazi phrase “Seig Heil,” which the man then proceeded to shout.

One of the protesters then hit the Jeep’s rear window with a baton before the car sped off, then abruptly stopped. Tenbrink then got out of the car with the handgun while the Fears brothers yelled, “I’m going to fucking kill you,” and “Shoot them,” and then shot at the group. The men fled in the Jeep, but not before one of the protesters took down the license plate tag.

Before Spencer’s speech, the Sun had spoken to Tenbrink and the Fearses. Tenbrink said he had driven from Houston to see Spencer speak, while William said he was “tired of the anti-white media” and thought the man who drove through a crowd of protesters in Charlottesville, Virginia, in August and killed Heather Heyer as a result, “wasn’t unjustified.”

Colt Fears, 28, came to #Gainesville from Houston. Wearing an SS pin, he says he's tired of the anti-white media. pic.twitter.com/CNu0bAmcfa

These two brothers I talked to yesterday arrested for attempted homicide after shooting at a protester https://t.co/xR5xk1Enp3 #SpencerAtUF pic.twitter.com/iz4syCi5c1

“[Spencer]’s trying to make it, normalize the idea for white people to have an identity, to advocate for their own interests and to advocate for our own existence,” William had told NBC News.

William had previously been documented on an Antifa blog for disrupting the May Day march in Austin, Texas, and for previously attending Spencer’s speech at Texas A&M in December.

The Sun reported that William had been arrested in 2009 on an aggravated kidnapping charge after abducting a woman in Texas. The Gainesville Police Department reported that Tenbrink is a convicted felon, and therefore faces additional charges for possession of a firearm by a convicted felon. Tenbrink’s bond is set at $3 million, while the Fears brothers’ are set at $1 million.