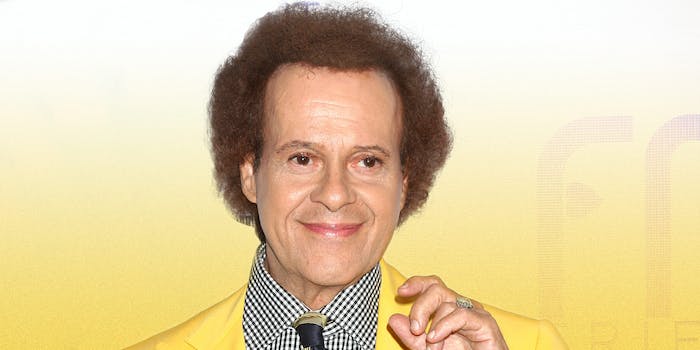 The world has been wondering what Richard Simmons has been up to ever since he took a break from the public eye in 2014. National Enquirer and Radar Online have the same answer: Both allege the fitness personality has taken time away from his fans in order to undergo hormone replacement therapy, sex change surgeries, and transition as a transgender woman.

But Simmons claims that isn’t the case. And he’s suing the parent company of both, American Media Inc., arguing that the publications have defamed him by running a series of articles claiming he’s transitioning.

“The National Enquirer and Radar Online have cheaply and crassly commercialized and sensationalized an issue that ought to be treated with respect and sensitivity,” Simmons’s lawsuit claims, according to an NBC News report. “Principles of freedom of speech and press may protect their prerogative to mock and degrade the LGBTQ community. But freedom to speak is not freedom to defame.”

American Media Inc. isn’t about to back down, however. The media corporation argues that there is credible evidence behind its articles, with a statement published on Radar Online going so far as to suggest that Simmons is behaving hypocritically by alleging that he has been defamed by the rumors.

“Indeed, it is ironic that Mr. Simmons claims to be an avid supporter of the LGBTQ community while at the same time alleges that he was defamed by Radar and the ENQUIRER report that he had transitioned into a female,” the article states.

Meanwhile, Simmons’ lawsuit pushes back against that claim, suggesting that Radar Online and the National Enquirer have handled an extremely sensitive topic poorly.

“For Mr. Simmons to sue, the National Enquirer and Radar Online have cynically calculated, will make Mr. Simmons appear to maintain that there is something wrong with transitioning from one gender to another,” the lawsuit notes. “To remain passive and do nothing, the calculation continues, will be seen as tacitly conceding the truth of the stories, encouraging more of them. National Enquirer and Radar Online have miscalculated.”

Rumors about Simmons transitioning have circulated since 2016. And there’s a valid reason to fight back against the rumors: Doing so sets a clear message that gender transitioning is a serious topic that should be treated with dignity and respect, not one that’s relegated to tabloid rumors.

Richard Simmons previously echoed this point in 2016, in a Facebook post both honoring the LGBTQ community and refuting rumors from tabloid publications about an alleged gender transitioning.

“Although I am not transitioning, I have and always will be supportive of those who are going through their journey,” Simmons wrote.

Some tabloids have recently falsely reported that I am transitioning. In response, I feel compelled to set the record…

It’s unclear how the rumors began, or whether there are any credible sources behind them. Simmons claims that former assistant Mauro Oliveira is blackmailing him, sending “untrue” stories about the fitness guru to various publications in an attempt to extort him.

“Mr. Oliveira contacted the National Enquirer on at least three separate occasions offering three separate stories as to why Mr. Simmons has been absent from the media in the past few years,” the lawsuit alleges. Oliveira denies wrongdoing, People reports.

While Simmons vehemently expresses support for the LGBTQ community, this certainly isn’t the first time a celebrity has aggressively shut down rumors about their gender identity. Lady Gaga previously denied being intersex or transgender, joking that her “little vagina is very offended” at the suggestion. After rumors came up alleging Wendy Williams is a transgender woman, the talk show host was also quick to shut down the idea, suggesting that “there’s no worse way to insult a woman than to say she looks like a man.”

Ever since Caitlyn Jenner’s transition made mainstream news two years ago, many media organizations remain unsure how to handle trans news stories, and media personalities are still figuring out how to deny rumors while respecting trans people. Other times, prominent figures have faced ridicule over their perceived androgyny. Conspiracy theorist Alex Jones called Michelle Obama a transphobic slur in 2014, shortly after Joan Rivers joked that Obama is a transgender woman.