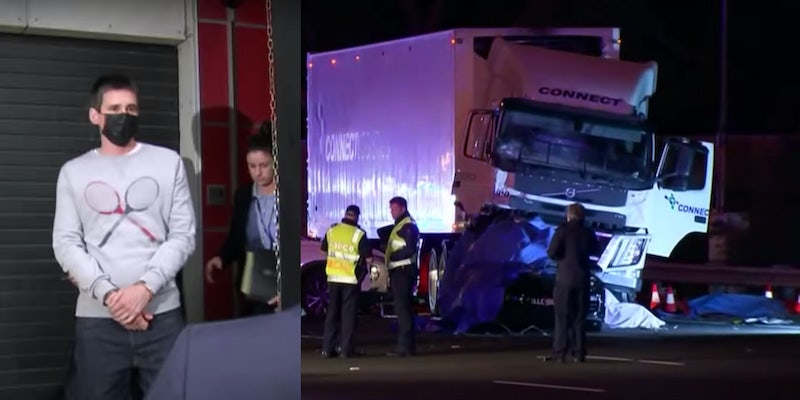 Richard Pusey's detractors think his sentence is far too lenient.

Australian man Richard Pusey was sentenced to 10 months in jail after being convicted of “outraging public decency” when he filmed four dying officers following a crash last year.

The 42-year-old Pusey was pulled over last year for speeding down a highway in his Porsche. As four Victoria police officers prepared his arrest, the driver of a semi-trailer swerved out of its lane and struck all four of them.

Pusey, who was several feet away from the others, was not struck. He did remain on the scene of the accident for several minutes, however, filming one of the officers in her final moments.

For around three minutes, Pusey wound his way through the crash and mocked the officers on video. He made no attempts to assist them. He then left the scene and drove home.

Pusey has since been labeled the “most hated man in Australia.” After his arrest, police discovered the footage on his phone and learned that he had shared it with several friends. He pled guilty to outraging public decency, along with drug possession and a speeding offense. He was ultimately sentenced to 10 months in prison, a $1,000 fine, and had his driver’s license suspended.

The man who was driving the semi-trailer, Mohinder Singh, was sentenced to 22 years in prison for four charges of culpable driving causing death.

Pusey had already spent 297 days behind bars when the sentence was passed, which effectively meant he’d already served his time in prison. He was set to be released yesterday.

The public, along with the families of the slain officers, were furious over the soft sentence.

“When his day comes, I hope that he faces the same coldness and the same callousness with which he provided my members when they faced theirs,” he said. “Four upstanding heroes died on that day, and that one coward, one soulless coward, lived.”

People online seem to agree. Twitter users have shared their outrage over Pusey’s short sentence and decried a justice system that let him off so lightly.

“The Magistrate in Richard Pusey’s case accepted a charge of Outraging Public Decency and in sentencing has Outraged Public Decency. I hope this is going straight to the Appeals Process so Justice can be served,” @adrienne88888 tweeted.

Many people took comfort in analysis from the Herald Sun‘s chief court reporter Rebekah Cavanagh. She explained that, while upsetting, Pusey’s prison sentence is fair because “being a downright despicable scumbag devoid of any redeeming features unfortunately isn’t an offence.”