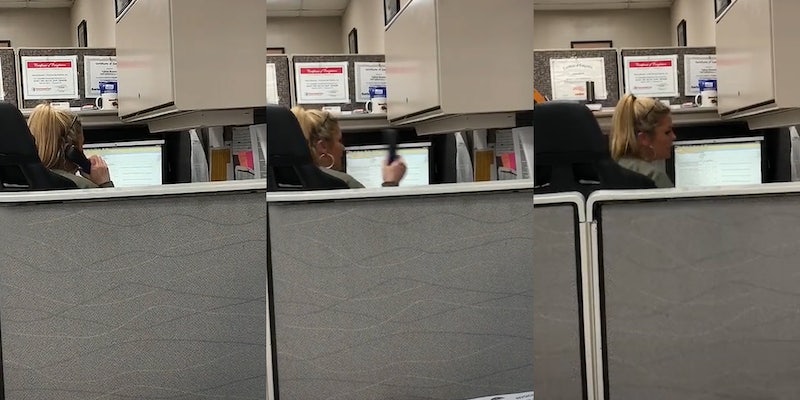 'Turns around and answers the next call in the sweetest voice.'

User Valerie Bennatt (@valeriebennatt) posted the video of her co-worker and it quickly went viral on TikTok with about 2.3 million views as of Tuesday.

In the video, Bennatt’s co-worker hangs up her phone and then says, “That’s 15 goddamn fucking minutes that I can’t get back from my fucking life. What the fuck.” Then the phone rings again.

Some TikTok viewers guessed that after the co-worker’s annoyed outburst, she went right back to her “sweet” customer service voice for the next call.

“Turns around and answers the next call in the sweetest voice as if the sailor hadn’t just taken over her body,” one viewer commented.

“You cut the video off too soon you needed to show the phone ring & her answer the next line all sweet and pleasant bc you know that’s what we do,” another viewer commented.

But the co-worker’s reaction after ending the call was likely justified, some viewers say. Or at least understandable.

“Me every day at work,” one user said.

A third commented, “anyone who has worked customer service felt that in their soul.”

“I just get mad when they call! Because how dare they,” another joked.