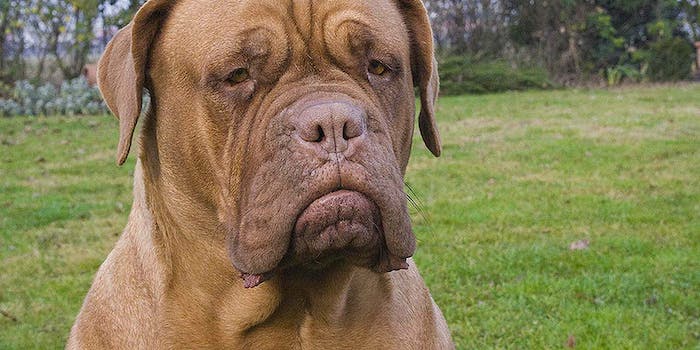 A cop-shoots-dog story is never a happy one.

There are a lot of communities on Reddit where users can complain about cops.

There’s r/Bad_Cop_No_Donut, where people post stories about police abuse. There’s r/Police_v_Video, which advocates for greater respect for citizens’ rights to shoot video footage of police on the job. And there’s r/copwatch, which, as the name implies, watches cops.

In addition to these subreddits, there is another that tracks an oft-overlooked corner of the growing tide of police militarization recently thrust into the limelight by the heavy-handed police crackdown on protestors in Ferguson. While new stories on the subreddit trickle in at a rate of a few a week, r/puppycide’s efforts to document instances of police fatally shooting people’s pet dogs is positively heartbreaking for any animal lover.

A Reddit user going by the handle Ozzymandiaas started the community about a year ago as a way to give exposure to an issue that, while relatively widespread, typically doesn’t receive a great deal of media attention.

‟So many times I saw stories posted in other subs and you could see from the comments that people were shocked to hear that things like this were happening at all,” Ozzymandiaas told the Daily Dot. ‟I felt a sub dedicated specifically to these incidents could help.” 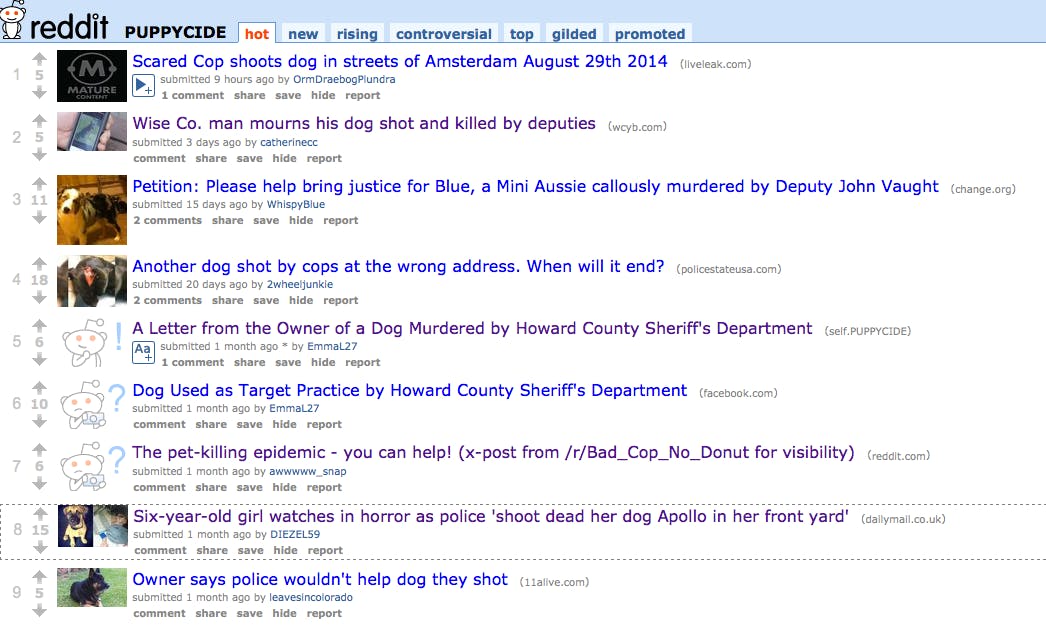 Recent articles posted to r/puppycide tell stories such as the one about a cop in Michigan who shot a dog eight times because it was barking too loudly. He was caught on tape saying, “I don’t do dogs. I’ll shoot the (expletive) thing,” immediately before the incident. Or like the one about a six-year-old girl in the U.K., who watched in horror while police shot her dog as it stood in her front yard.

Another post lists more than 100 memorial Facebook pages set up by the former owners of dogs that were killed by police.

[Warning: The video linked below is extremely graphic and likely to upset some viewers.]

The most galling incident Ozzymandiaas can recall is a video showing a police officer holding a dog at bay at the end of the catchpole. ‟[The dog is] clearly not a threat in any way at that point,” the moderator recalled, ‟and the officer shoots the dog twice, the fatal shot coming as the dog is lying down, tail wagging.”

While the contributors to the subreddit do their best to compile a list of incidents, comprehensive statistics are difficult to come by. The U.S. Postal Service may maintain a centralized national record showing how many of its letter carriers are bitten by dogs each year (almost 6,000 in 2012), but no such national database is kept for police killing animals. Each individual police department logs every time an officer kills a dog in a discharge report, but someone would have to constantly go through every discharge report for every law enforcement agency in the country to determine how regularly it occurs, becuase only a select few keep running internal tallies.

An analysis by a local news station in Atlanta found that police had shot more than 100 dogs in that metro area between the years of 2010 and 2012. It should be noted that there is also no established, universally agreed upon figure for many humans are shot by police each year.

Ozzymandiaas speculates that the shooting of dogs is a trend that’s risen concurrently with the militarization of the country’s police, which has gone from rarely conducting paramilitary-style SWAT raids in the ’70s to the current situation of carrying out more than 50,000 such home invasions annually:

In recent generations dogs have gone from our barnyards, to our backyards, to our living rooms. They are in our homes much more than they used to be. Law enforcement is now engaged in all these domestic “wars” like terror, drugs, and crime. This means they are in our homes much more than in generations past. Combine all this with the nature of the dog: To approach a stranger entering vs run away (as most cats do) and you have a recipe for a nasty trend in these incidents.

None of this is to imply that a police officer shooting someone’s pet is never warranted. There are clearly times when, in the line of duty, an officer comes up against a dog that’s in the process of violently attacking them or another person. Just as law enforcement officials are very often justified in their use of deadly force against humans, so too are they justified in doing so against an animal.

Radley Balko, whose book Rise of the Warrior Cop is an urtext for people attempting to understand why the police responding to the demonstrations in Ferguson looked like they were armed to fight the Taliban in Afghanistan, argues that the problem is training. In a 2009 article for the Daily Beast, Balko charged that all Postal Service employees are given extensive training on how to read dogs’ body language to tell if they’re actually dangerous and how to diffuse hazardous situations through the use of voice commands, toys, or even mace. However, most police officers around the country receive no such instruction and instead often immediately jump to the use of deadly force when they feel threatened by someone’s pet.

There’s evidence this type of training does make a concrete difference. After a pair of lawsuits directed at the Milwaukee Police Department, as a result of officers killing dogs, the department instituted a new training procedure that resulted in a marked drop in the number of incidents.

‟The goal of raising awareness on the issue is to get the public focused on it,” Ozzymandiaas insisted. ‟That will result in pressure on agencies to say, ‛Well, we need to move this dog shooting issue up our priority list because it seems like that is what the public is demanding.’”