If people are going to talk about punching Ellen Pao in the face, the subreddit for that is going to be made private.

Less than 24 hours after Reddit took down five controversial subreddits—including r/fatpeoplehate—sparking outrage among many redditors, another subreddit has been placed on lockdown.

This time, it’s r/punchablefaces, and if someone posts on that subreddit, they’re liable to be banned as well.

As of Thursday evening, this is what you saw if you tried to log onto r/punchablefaces, which showcases real-life human faces that redditors believe should be punched.

Our goal is to enable as many people as possible to have authentic conversations and share ideas and content on an open platform. We want as little involvement as possible in managing these interactions but will be involved when needed to protect privacy and free expression, and to prevent harassment. It is not easy to balance these values, especially as the Internet evolves.

We are learning and hopefully improving as we move forward. We want to be open about our involvement: We will ban subreddits that allow their communities to use the subreddit as a platform to harass individuals when moderators don’t take action. We’re banning behavior, not ideas.

But that didn’t sit well with a number of redditors, and some began a sexual harassment campaign against CEO Ellen Pao. A sampling. 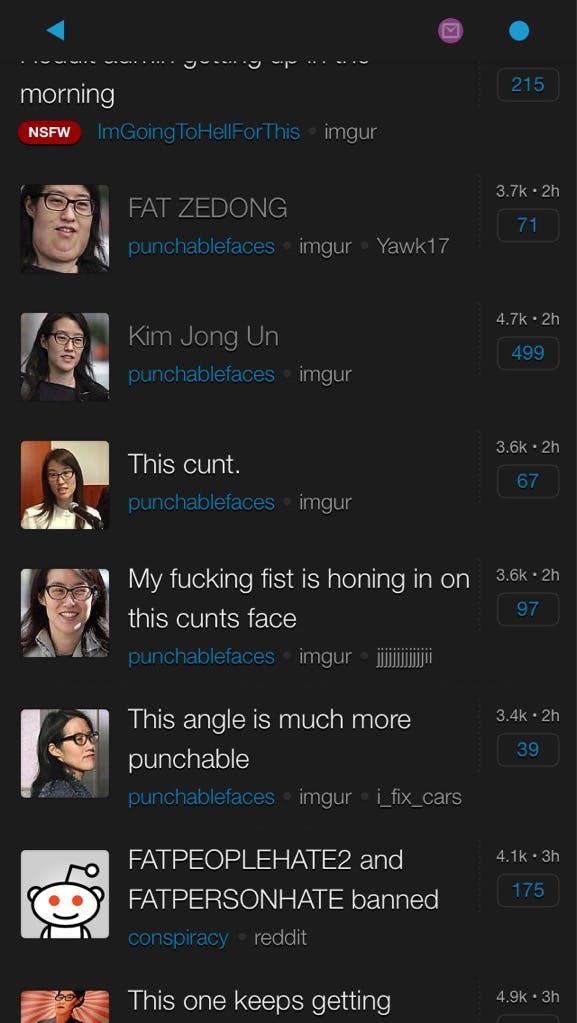 As one r/punchablefaces moderator wrote Thursday:

Just got back home. I deleted all Ellen Pao posts. It took me a while since you guys managed to raid this place while I was asleep. This should answer the questions I get asking why I didn’t do anything before. I put this sub on lockdown because of the massive rage from the FPH community. As I stated in my last post, neither Ellen Pao or the FPH closing is any of my business. If it would have, I wouldn’t be posting this. I would also be shadow banned. Any posts regarding Ellen Pao (that isn’t a serious discussion mentioning her) will end in a permanent ban. No questions asked, no “I’ve learnt my lesson”, no nothing. This isn’t your new “safehaven” for posting about your disliking of fat people. Neither is it your place to hate on the reddit CEO. It isn’t my (yes, I say my since the other two mods are banned) job to clean up your shit.

Someone also started a petition on change.org that seeks to remove Pao as CEO, and as of 8:30pm ET on Thursday, it had more than 9,100 signers.

As the Daily Dot’s Aaron Sankin opined, “What we’re witnessing right now are the birth pangs of a Reddit that cares about things like rape threats enough to ban entire communities when they make other users feel unsafe. On one hand, it’s easy to credit the shift in company policy to Pao, who became an feminist icon in Silicon Valley for her unsuccessful gender discrimination lawsuit against prominent tech venture capital firm Kleiner Perkins… Redditors, at least the most vocally unhappy ones, blamed Pao’s ‘feminist agenda’ for the subreddit bans, but a survey of Reddit users conducted in March showed that sacrificing the site’s reputation as a haven of unlimited free speech in favor of making Reddit a more comfortable place for its users makes a lot of business sense.”

And perhaps because a number of users said they wanted to punch Pao in the face on Wednesday, those who like to visit r/punchablefaces are unable to do so on Thursday.