Photo via Mike Morbeck/Flickr (CC BY 2.0)

This post contains a graphic image of a head injury.

On Thursday, Bridget Kitson shared a heartbreaking message with Portland, Oregon’s Reddit community. Her boyfriend, 26-year-old Sam Whitehorn, had been viciously attacked by a group of three strange men while walking past a bar—all because they were fans of a rival football team.

He was wearing a Packers beanie and a few Seahawks fans didn’t like that very much so they got into a little argument and then one knocked him out so hard he hit his head on the curb of the side walk. Sam was not violent during this exchange. He is still currently in ICU. He had to had emergency brain surgery the night of the incident and is slowly recovering. It will be a long and bumpy road and he may never be the same again. The person who did this to my boyfriend is still out there. The Portland police have detectives working on the case but I know Reddit can be an awesome resource.

Kitson also posted a horrific photo of Whitehorn’s post-surgery stitches to Imgur, showing a young man whose skull had essentially been split in half.

The incident rocked Portland, where police have been trying to track down the three Seahawks fans responsible for the brutal assault.

His mother, Kelly Whitehorn, flew in from Little Rock, Arkansas to help care for him in the hospital. She told local news station KPTV that witnesses described her son innocently walking down the street when the men attacked him.

“People approached him and were giving him grief about it because the Packers just lost,” Kelly Whitehorn told KPTV late Thursday night. “He was like ‘go away’ and they wouldn’t leave. They basically assaulted him for no reason.”

Now, the worried mom’s GoFundMe fundraiser, set up to cover hospital bills and recovery expenses, has raised more than double its original goal amount—with $32,000 raised by Friday at noon.

On Friday morning, Kelly Whitehorn updated the fundraiser page with some good news: her son had been moved from intensive care to the neurotrauma step-down unit at an unnamed Portland hospital. But while Whitehorn was “showing improvement with long moments of clarity” on Friday, part of his skull had to be removed due to extensive injuries. According to his mom, the college student and part-time bartender will have to wear a special helmet for weeks until his next surgery. 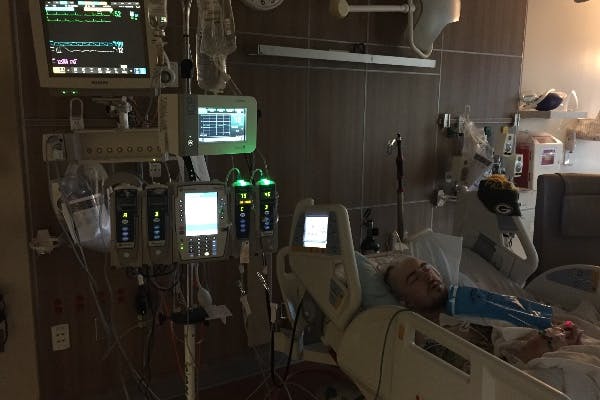 “He will be unable to return to college this semester or to work, indefinitely,” wrote Kelly Whitehorn on her son’s GoFundMe page. “The side of his brain that ‘finds words’ is injured so he has trouble calling things by their correct name. He calls water ‘bathroom’ for example.”

The heartbreaking case is still under investigation by the Portland Police Bureau, and Kitson posted the case number (16-16503) to Reddit inviting witnesses to come forward with tips.

According to KPTV, one of the Seahawks fans was responsible for repeatedly punching Whitehorn and is currently being sought as the main suspect.

“The suspect is described as a white or Hispanic man in his 30s, 5’11” tall with a thin build,” read the KPTV report. “He was clean cut and wearing a black jacket. He was with two or three other men and was last seen running east on NW Hoyt.”

Update 9:42am CT, Jan. 23: The Green Bay Packers organization sent along this official statement: “The Green Bay Packers were saddened to learn of the senseless attack on Sam Whitehorn last weekend. We have been in touch with Sam’s family and have heard from many of their concerned friends, and send the organization’s best wishes for a quick and full recovery.”

Photo via Mike Morbeck/Flickr (CC BY 2.0)