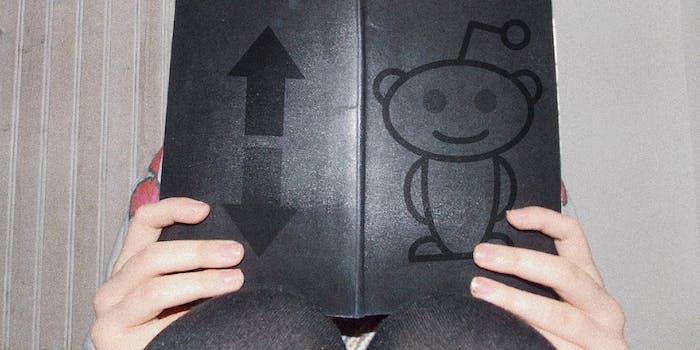 An often mundane yet fascinating window into the lives of two ordinary people.

For the last year, two random Reddit users have dedicated a long-forgotten thread to chronicling their day-to-day lives, providing an often mundane and yet oddly fascinating window into the lives of two ordinary people.

It all started in a (most decidedly NSFW) Reddit AMA thread about a man who had sex with his own mother. Some frivolous banter over a “GIANT SLIPPER ANUS” prompted redditor PortableBook to suggest to a perfect stranger, “Let’s be penpals.”

“Not much happened today, planted some flowers in the backyard, tended to my chili garden, played a few hours of DayZ, spent alot [sic] of time on Reddit, listened to music and studied for exams.”

Clicktoaddtitle’s first day was not a great deal more exciting either:

“I had a big test in school. That’s pretty much it. I might play some videogames later.”

With such an inauspicious start, one might expect the project was short-lived. But, somehow, it didn’t fizzle out. Two weeks in, PortableBook had a video game marathon, and a minor epiphany: “I’m beginning to realise, thanks to having a daily recap here, that all I do is waste my time playing games, if I died now I would have achieved nothing with my life.”

He added, “I want to start doing something with my life.”

On day 68, it was still going, as clicktoaddtitle recounted his day with the Scouts, including archery (“cause it’s so flippin [sic] awesome”), and plans for the evening: “We did the epic dance at dinner again. We’re going to the campfire soon.” PortableBook, meanwhile, skipped school for the day.

After 159 days, it was still going strong, with PortableBook reporting in to announce his last ever day of high school (“I expected it to be really cringe but it wasn’t that bad”).

Clicktoaddtitle had a really good rehearsal for orchestra on Day 200.

Day 220 was Christmas Day—clicktoaddtitle got a photo of their dog, headphones and an iPod case, while PortableBook got shirts, a book, and “this really amazing leather wallet with $100 inside, it looks really awesome.”

The 281st day was much like any other for clicktoaddtitle—a window into the life of an average teen.

“Today was Hawaiian Day for Spirit Week and I didn’t bother with it. Had a little test in math. One of the questions was downright impossible. Also had a test in Econ. Got 5/7. In theatre we went to the auditorium where some of us practiced the dance for the auditorium. I got applauded for my skills. My secret is practice. After that we worked on our theatre research projects. My group finally made some fucking progress.”

As you might expect, the thread became rife with in-joke and obscure references, with “giant slippery anuses” and the opaque concept of “marclar” featuring heavily. “Have the most epic marclar possible,” wishes PortableBook on day 322, “and never give up even when the marclar seems nigh.” Posts got ever longer too as the year went by, detailing everything from their breakfasts to their outfits (on day 348 clicktoaddtitle opted for “red and white shirt with blue shorts cause I’m patriotic like that”), a surreal first-person blow-by-blow of their lives that becomes engrossing in its ordinariness.

As it drew to the end, the duo became both melancholy about the diary’s completion, and philosophical about the future. “This feels like the end of an era, and it kind of is. You’ve been a god penpal,” clicktoaddtitle wrote on Day 364 (May 14 2014). “I hope you have the most fulfilling marclar you’ve ever marclared. Don’t let anything get in the way of your marclaring.”

“Now’s the time man,” wrote PortableBook. “Now’s the time to do whatever the fuck you want. Go talk to your crush, do whatever the fuck you want. Act as if there were no consequences. That’s how I want to live my life. As if it was groundhog day, no consequences involved, just not as extreme as groundhog day. Once I’m dead it’s not going to matter to me if I had a few awkward encounters in my life, so why would I bother holding back.”

The pair didn’t have crazy adventures to recount over their year, but, they later reflected, that was kind of the point. After the duo’s diary-keeping was brought to the the attention of wider Reddit via r/bestof, PortableBook reappeared to explain the therapeutic benefits the year-long exercise had. “Talking to /u/clicktoaddtitle all this time sort of comforted me,” he said, “knowing that everyone else has their own problems and maybe they feel that their life is mundane too.”

The impromptu diary has now inspired a new subreddit, /r/Life_journals. So far, it’s barely used, but moderator Odrevan hopes to replicate the success that PortableBook and clicktoaddtitle in their own shared life-journaling. “The concept of this subreddit is simple,” the sidebar reads, “pair up with another redactor and share an update every day for an agreed time with your new best friend.”

Though the diary has now finished, the duo still talk, and consider one another friends. clicktoaddtitle—the younger of the two—is now 17, and says in the last year he feel[s] that [he’s] matured a lot.” But asked whether he’ll continue a diary, his response is an unambiguous no.