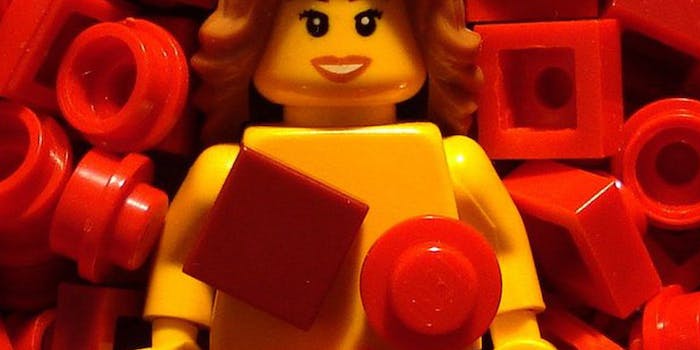 Alex Eylar has a LEGO collection every kid dreams about.

In his living room sits a desk packed with tubs, boxes, and cylindrical containers filled to the brim with more than 30,000 colorful blocks. On top rests an army of LEGO bodies and heads ready to be transformed into anyone imaginable.

And over the last two years, Eylar, from Orange County, Calif., has done just that. Using his stockpile of LEGOs, a Sony camera, and his eye for creativity, Eylar has recreated some of the most memorable scenes in movie history—including Star Wars, Psycho, The Godfather, and A Clockwork Orange.

“I’d always been a LEGO fan, building whatever I felt like, and I’d always been a movie fan, so a clash was imminent,” Eylar told the Daily Dot. “I built a few scenes—iconic scenes, things people would recognize—and it just kept going from there.” (For the full list of the movies represented, go here.)

Each scene has its own unique challenges. The 007 one, for example, took less than 15 minutes and just required a couple LEGO rubber tires in a row and a mini-figure walking across the frame. On the other hand, the scene from Inception was a totally different animal, Eylar said.

“[It] took a full hour, because I had to build an entire hallway that could be flipped over,” Eylar said. “Lighting was coming upwards, not downwards, too, so the entire build was a challenge. But it’s my favorite of the scenes I’ve done. It was a cool challenge, and it paid off.”

And it’s also paid off in terms of views. Eylar’s Imgur photo set collected more than 1.1 million views in less than a day, largely thanks to post on Reddit that reached the front page Thursday night.

Eylar got his first LEGO collection when he was 5 years old, and LEGOs have been a big part of his life ever since. His first creation was an old space monorail set he erected in his basement, but it was destroyed in a fire in 1993. He collected pieces all through high school and discovered the online LEGO community that only inspired him more, Eylar said.

“Been going strong ever since,” he said.

About three months ago, under his Reddit novelty handle ICanLegoThat, Eylar illustrated more than 35 weird Reddit user names using LEGOs (see most of them here). The result was nothing short of incredible, with the post collecting more than 2,300 comments. Since then, Eylar has put most of his LEGO building on hold to focus on graduate school. But now that classes are over, the LEGO creations may soon return.

“I’ve been thrust into the real world and need to focus on other things at the moment, but the LEGO still sits in my living room, for whenever I can find the time,” he said.

All photos by Alex Eylar