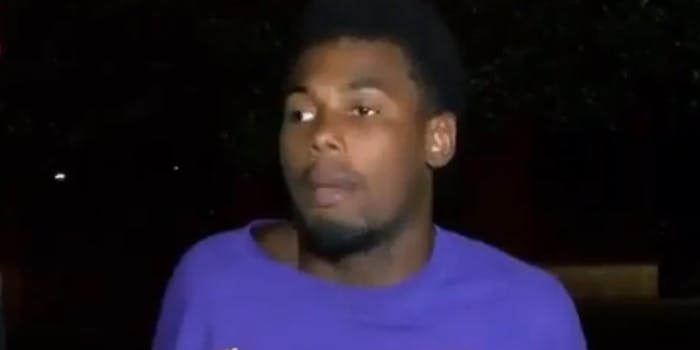 How many more Raheem Howards are going to be targeted by police without body cam footage?

On Wednesday, charges were dropped against Raheem Howard, a 21-year-old African American man who was accused of attempting to murder a police officer after he was stopped in Baton Rouge over a missing license plate. Officer Yusseff Hamadeh claimed during the Aug. 7 exchange that Howard shot at him, then fled the scene.

“I didn’t have no gun. I’m innocent,” said Howard in a viral video from earlier this month that showed him being taken to a car in handcuffs. “I’m only 21 years old. They should have recorded. They’ve got the body cams and dash cam. I didn’t do nothing but run.”

Skepticism around the Baton Rouge Police Department’s account of events has garnered the attention of community members and organizations. The National Black Police Association (NBPA) stated in a press release after Howard’s arrest that “the relationship between BRPD and the black community of Baton Rouge needs special attention, as the chasm of distrust since the tragedy of the Alton Sterling incident widens.” In 2017, Officer Hamadeh was also involved in the fatal shooting of a Black man during a traffic stop. Officers not wearing body cameras at time, nor was their police cruiser equipped with a dash cam. Jordan Frazier’s father called his son’s death an “atrocity.”

Ultimately, the charges were dropped against Howard this week because there was zero evidence he shot at Officer Hamadeh. “He didn’t have it. There was not evidence. Because he didn’t have a gun, he didn’t fire a shot,” Ron Haley, Howard’s attorney, told WAFB9. “And I think the suppression of the evidence by the cameras either malfunctioning or being willfully turned off only lends to that argument.”

The details of Howard’s case follows a longstanding pattern of racist policing in the United States, where Black men are disproportionately targeted and police are then strangely unable to record evidence, either via body or dash cams, that could clear victims of unjust charges. The term “driving while Black” surfaced in the 1990s to highlight the phenomenon of Black Americans being stopped often by police, largely on suspicion of drug possession and other minor offenses. Thirty years later, not much has changed, even when officers are supposed to be wearing mandatory cameras.

“Black people in this nation should be afforded the same protection, safety, and opportunity to thrive as anyone else,” stated writer Bryan Stevenson in the anthology Policing the Black Man. “But, alas, that won’t happen until we confront our history and commit to engaging the past that continues to haunt us.”

A 2014 report by the ACLU of Illinois evidenced how African American and Latino drivers are “nearly twice as likely as white drivers to be asked during a routine traffic stop for ‘consent’ to have their car searched,” even though white motorists are 49 percent more likely than African Americans to have contraband if searched by law enforcement. In 2016, the ACLU of Florida discovered that racial biases occurred in relation to Black people being stopped and issued far more seatbelt tickets by police than white residents.

The officers that killed Scott, Rose, and Castile had no body cameras. Officer Roy Oliver’s account of shooting at the car that Edwards was a passenger in was later disproved due to body camera footage. He was later sentenced to 15 years in prison.

Some may question the motives of those like Howard who run during police encounters, but Kristin Henning in Policing the Black Man articulates why police encounters trigger fear in Black boys and men: “That flight is also just as likely to reflect a personal desire to avoid contact with a corrupt system as it is to be a sign of criminal activity. Black boys who live in a society where police-on-black shootings are commonplace have every reason to run from the police.”

Ron Haley, Howard’s attorney, has stated that the family is deciding whether they wish to pursue any civil action against Officer Hamadeh.

“In a world where black citizens are fearful of the outcome of encounters with police officers, it is not a far reach that running seems a viable option,” the NBPA said. “Running should not end in potential harm to a citizen who, by all appearances, has only committed the crime of having a missing tag. Nor should it release the criminal justice system from being responsible for the fair treatment and due process of Mr. Howard.”