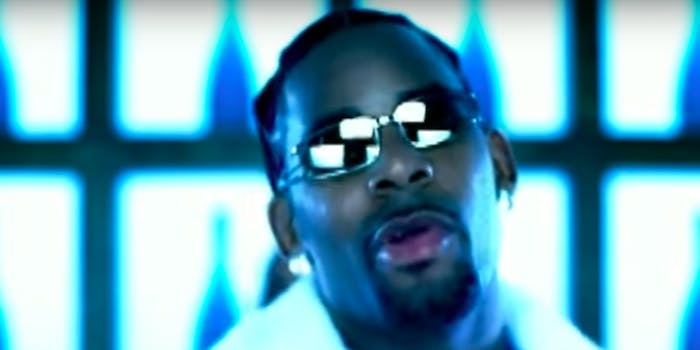 R. Kelly’s Spotify streams have reportedly increased 16 percent since Surviving R. Kelly debuted on Thursday, according to the Blast.

A representative for Spotify apparently told the Blast about the increase in the wake of the six-part series about the women who endured sexual, physical, and emotional abuse from Kelly throughout the decades.

The social media outcry has been swift and significant since the documentary started airing last week. Although reporting has indicated for decades that Kelly is a serial sexual predator, fans, the music industry, and collaborators alike have excused Kelly on the strength of his musical chops.

Actress Jada Pinkett Smith responded to the report in a video on her Twitter account, saying, “How is it that R Kelly’s music sales have spiked (substantially) since the release of the docuseries Surviving R Kelly? I need some help in understanding. What am I missing???”

How is it that R Kelly's music sales have spiked (substantially) since the release of the docuseries Surviving R Kelly? I need some help in understanding. What am I missing??? pic.twitter.com/pysqVxLzyi

“I really don’t want to believe that it’s because Black girls don’t matter enough,” Pinkett Smith added. “Or is that the reason? So let me know. Happy Sunday,” she said, adding that she wanted to field a conversation about the documentary series on Facebook Live.

Spotify didn’t respond to request for comment on the matter, but this isn’t the first time Spotify has run into the controversies surrounding Kelly and his music.

The #MuteRKelly hashtag, started by activists Oronike Odeleye and Kenyette Barnes took off in the spring of 2018. In May, R. Kelly’s music was removed from Spotify playlists and promotions after he was found in violation of their updated hateful conduct policy.

Spotify quickly backpedaled, saying that, “Our playlist editors are deeply rooted in their respective cultures, and their decisions focus on what music will positively resonate with their listeners … Across all genres, our role is not to regulate artists. Therefore, we are moving away from implementing a policy around artist conduct.”

Requests for comment from Kelly’s representation and RCA Records, his record company, were not returned by press time.