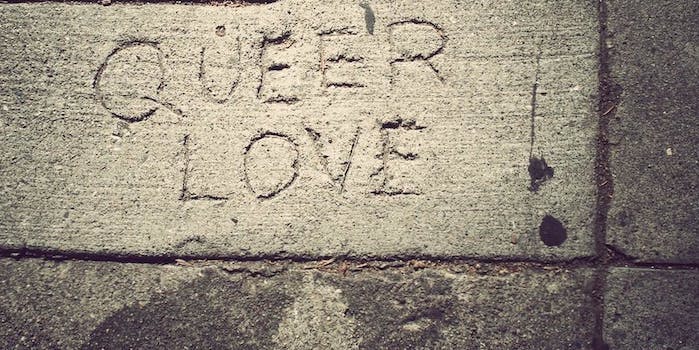 Come one, come all. Share your pride, your story, and a selfie.

On June 14, the day of Donald Trump’s birthday, Twitter threw a birthday party of their own, inviting all to attend the #LGBTQHatesTrumpParty—then #GaysForTrump bit back, sparking a mini-battle on Twitter feeds.

But today, a new hashtag has emerged, one void of political affiliation but full of personal pride. #QueerSelfLove has become a welcoming refuge for the LGBT community to introduce themselves as whomever they want, however they want—whether that’s through photos, a simple, “Hi, my name is” introduction, or personal anecdotes in the wake of the Orlando shooting.

Dylan Marron, an actor on the “Welcome to Night Vale” podcast and creator of the hashtag, expressed his distraught for his LGBT family on Twitter after the death of 49 people and 53 injured at Pulse, a gay Orlando night club:

To all my LGBTQI family: I love you and I celebrate you. We lost many siblings last night in Orlando. Let's hold each other close today.

Last night, Marron’s #QueerSelfLove hashtag surfaced, with the support of his co-star Cecil Baldwin. The “Queer Self Love” train is now trending on Twitter, and both actors have received copious amounts of support, as they have reminded everyone to appreciate, accept, and advocate for one another.

I am a soft-spoken brown queer man who wears his mother's pearl earrings. And I love my queerness. Let's start a #queerselflove hashtag

I'm fat bi survivor of abuse, I fought long and hard to own my femininity & love other women instead of competing w them. #queerselflove

I'm a queer Christian with learning disabilities, body image issues and lots of self doubt. I love myself anyway! #queerselflove

And some are simply using the hashtag to support others and thank Marron for creating the communal space:

thank you @dylanmarron for this lovely space you created on the internet with #queerselflove https://t.co/B2QEhputYx

The #queerselflove hashtag is a beautiful thing. I hope it keeps trending.

friendly reminder that it's okay to be confused about your sexuality, it's fluid and it's scary and labels aren't necessary #queerselflove

But most are proudly claiming their queerness, no matter their color, religion, or lifestyle:

I am a disabled queer woman of color, I'm an artist of many forms, I live openly and authentically #QueerSelfLove pic.twitter.com/gIrDXTtlZY

#queerselflove gotta love myself cos im the only one I've got pic.twitter.com/Chqatc9iMa

I am very queer and my wife is very bi. We've been together ten years & we're cute af. #queerselflove pic.twitter.com/bmzlhM68Rm

The hashtag has become an unstoppable and uplifting force—during a time when we all need it.