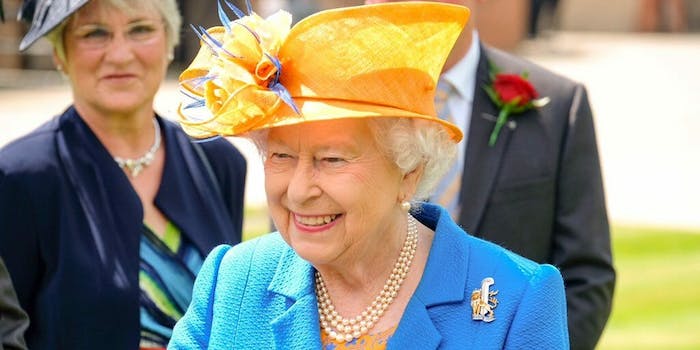 She's might not be a Grande fan, but the queen has a great bedside manner.

The Queen has arrived at #Manchester Children's Hospital to meet victims of the suicide bombing at the city's arenahttps://t.co/B8rZWWOB4l pic.twitter.com/ferHzftRuv

Today The Queen is visiting Royal Manchester Children's Hospital to meet some of the victims of this week's attack in the city. pic.twitter.com/VgvGA5WzUb

According to Mashable, the queen spent time with 15-year-old Millie Robson and 14-year-old Evie Mills, who were both injured in the attack, as well as hospital staff.

Another child, 12-year-old Emily Murrell, missed the queen’s visit because she was in surgery, but her mom Ruth was able to speak to Elizabeth instead.

The Queen speaks to Millie Robson, aged 15, from County Durham, and her mum, Marie at Royal Manchester Children's Hospital. pic.twitter.com/9yJem1gt88

Her Majesty meets Evie Mills, aged 14, from Harrogate, her mum, Karen and dad, Craig at the hospital in Manchester. pic.twitter.com/DK14fFRGQS

Whilst at the hospital in Manchester, The Queen spoke to 12-year-old Amy Barlow, from Rawtenstall, and her mum, Kathy. pic.twitter.com/nzYPo5cgu3

Meeting with Robson, the queen asked her she had enjoyed the concert before the attack, to which Robson replied that she had won two VIP passes, and met Grande backstage. Queen Elizabeth also asked Mills if she thought Grande was “a very good singer.”

“She sounds very, very good,” the queen said in reply.

“It’s dreadful. Very wicked. To target that sort of thing,” she then told Mills’ parents.

Even if the queen doesn’t listen to Grande herself, at least she knows how to connect with fans who do.