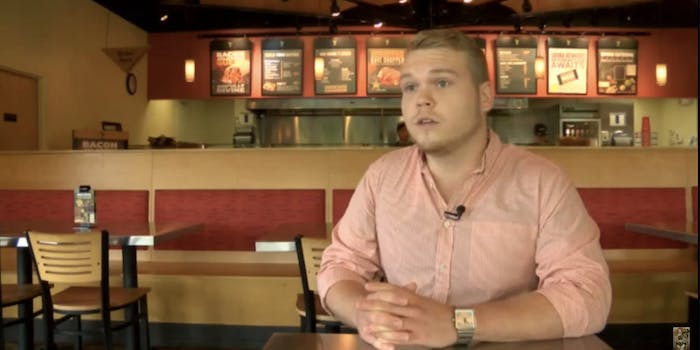 This should put a little kindness in your heart.

In a world of constant struggle and strife, it’s good to have a daily reminder of why you shouldn’t lose faith in humanity. If your quota for compassion has yet to be filled, then this video should do the trick.

A moment captured in a restaurant in Kentucky went viral this week. This after a customer and an employee of Qdoba, a Mexican food chain, in Louisville, Ky., helped a disabled woman in a wheelchair get into the store. She’s a regular, Ridge Quarles, the employee, told a local news station. No one is sure of her name or her story.

“Sadly enough, she has to sit outside the restaurant until someone notices her,” Quarles said, “or another customer that’s coming in has to let her into the building.”

After helping the woman through the food line and to a table in the lobby, Quarles stayed at the table to help her eat. Dr. Dave Jones, the customer who had Quarles get the woman inside, was impressed with the young man and pulled out his phone to record the act of kindness.

“He didn’t stop to think about, ‘Well, should I help her, should I not,’ he just went over, put the gloves on and started feeding her,” Jones told a reporter. “It seems to me that if everybody in the world would just use the little simple gift that they have to maybe benefit somebody else, think what the world would be like.”