When I was in high school, my mother refused to listen to me if I ended my sentences by trailing off into a questioning up-note.

When I was in high school, my mother refused to listen to me if I ended my sentences by trailing off into a questioning up-note. My mom’s ultimate goal, I think, was to get me to speak with authority, perhaps even more authority than I possessed or deserved as a teenage girl. But mainly, she just thought it sounded super-annoying.

She’s right—it does. There’s a technical term for this: a “high-rising terminal,” more commonly referred to as “uptalk.” It serves a purpose for young people: Studies show that kids who are leaders among their peers are actually more likely to use it than people on lower rungs of the social ladder. This social purpose can, like most things, be expressed with a Simpsons reference: Remember the part where Bart does an elaborate skateboard routine to impress Lisa’s new friends, and one of them shrugs that “the whole thing smacks of effort”? Uptalk is an inoculation against sounding too invested or committed to be cool.

A year or so ago, I was trying to explain to a friend who was relatively new to Twitter how to sound cool on the Internet. I recommended that he leave off closing punctuation. We’re all doing it, I told him—just look at popular webcomics like Hark, a Vagrant, whose characters often leave off punctuation for comic effect (“check out my Gospel of Mark fanfic”; “you are not a very good monk”), or Dinosaur Comics, whose talking lizards actually use a ton of exclamation points but tend to trail off punctuationless for certain punchlines (“Utahraptor if you heard that it was the sound of my brain exploding at the thought of a lifetime of missed sexy opportunities”). For support, I tweeted at Ryan North, Dinosaur Comics’ creator and also something of a linguistics buff, asking if he could help me clarify the purpose of throwing the period away. His response: “No punctuation is just a form of punctuation.” 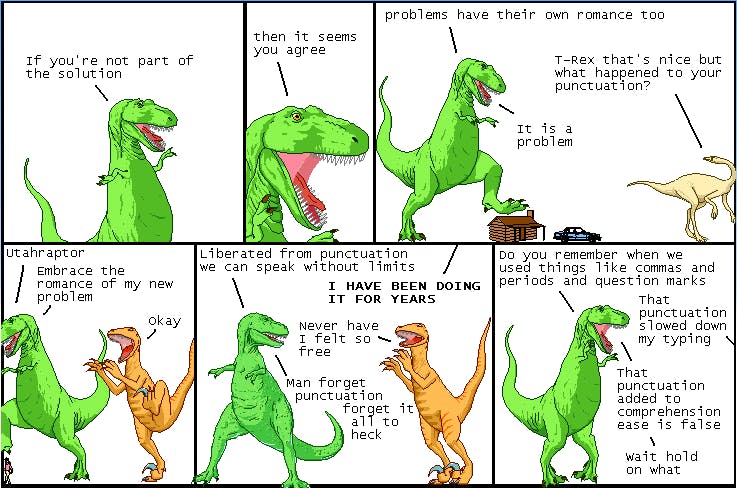 In other words, when you notice that the full stop is falling out of style, the question isn’t just “What’s wrong with periods?”—it’s also this: “What’s so great about leaving off punctuation guys what in the heck is that doing for you” (Period omitted on purpose, just to be clear/cool.)

Ben Crair in the New Republic has answered the first question, writing that periods have become weirdly antagonistic:

“I’ve noticed it in my text messages and online chats, where people use the period not simply to conclude a sentence, but to announce “I am not happy about the sentence I just concluded.”

I kind of feel like nobody’s ever punctuated online chats, except maybe my mom (who also feels the need to say a formal “goodbye” almost every time we chat, whereas most people just drift away—the conversational equivalent of eschewing the period). But Crair is totally right that “sorry about last night” is qualitatively different from “Sorry about last night.” and that “no” is definitely worlds away from “No.”

A quick scan of my iMessage buffer, though, turned up punctuated texts including “A fat corgi. Super best.” and “OMG burrito.” Surely these are things nobody can be mad about; the period here is not expressing displeasure. So what gives? One clue comes from this conversation I had with my editor, who suggests punctuation is clearly a marker of a bygone generation:

Me: i definitely have some friends who always punctuate
and it is definitely not angry

Cooper: are they Olds?

Me: they are not
but they are Seriouses

In point of fact, though, that’s not quite right; they are Declaratives.* One is earnest and puts a lot of thought into everything he says (he feels strongly about a burrito, I guess); one is playful but argumentative (he just dares you to disagree that a fat corgi is best). The fact that they punctuate lends weight to the things they say, even if it’s on the subject of food and pups—or at least, it lends the appearance or tone of weight. (I don’t happen to disagree about the corgi, but if I did, the period wouldn’t convince me; it would only convince me that my friend felt authoritative about the subject.) The period is the equivalent of banging your fist on the table for emphasis: A fat corgi is the best … PERIOD.

Eschewing the period, then, is avoiding emphasis, dodging declarativeness. It’s declining to speak with a tone of authority. It is, in short, the text equivalent of uptalk or vocal fry, the speech patterns that young people (especially young women) use to introduce a sense of accommodating uncertainty into their statements.

Caitlin Kelly got at this in her “Real Guide to Using Twitter” in the New Yorker:

Closing punctuation smacks of effort. A sentence with a period stakes itself to the ground; a sentence without a period is just hanging there, waiting to link up with something else or maybe just remain suspended in the viscous medium of the Internet. You’re not saying anything, you’re just saying. It’s a textual drawl, a shrug. (This is especially true on Twitter, where a power user’s punctuationless gibes at friends might stand side-by-side with serious statements on news or links to important articles.)

Crair notes that we write increasingly the way we talk, particularly when—as on Twitter—we write conversationally:

Now, however, technology has led us to use written language more like speech—that is, in a real-time, back-and-forth between two or more people. “[P]eople are communicating like they are talking, but encoding that talk in writing,” Clay Shirky recently told Slate.

So it makes sense that young and youngish people would evolve a way of writing that, like the way they talk, contains a coded undercurrent of “not that I know or particularly care.” The questioning lilt at the end of an uptalky sentence, the uncertain creak of vocal fry, the blank space at the end of a tweet: They’re all serving the same purpose, softening statements and making them more casual, pushing away any implication that we’re overly invested or authoritative or serious. And annoying the heck out of the Olds.

* They are also Olds, sort of, but no more so than I am. They are in their 30s, but they know how to Internet.