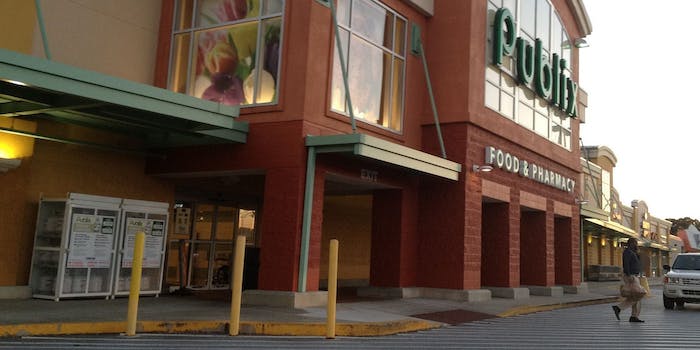 This Publix employee knows the true definition of customer service

This stock clerk's actions go beyond just pushing your cart out to your car.

Ask anyone from the south and they will tell you, Publix is more than just a grocery store. Some tout the deli section of the store as a gourmet restaurant that should be reviewed by Zagat, given its delicious sandwich offerings. Others clamour to the store because of its pristine interior and friendly customer service.

Yet, when people cite the store’s customer service, they mean more than just an apathetic offer to push your cart full of groceries out to your car. As one patron learned, it’s a full service experience.

Stock clerk Gage Boucher was photographed last weekend tying the shoes of an elderly customer who was too feeble to do so himself. Fellow shopper Keith Kiel was able to grab a quick picture of the good deed, and later posted it to Facebook, wishing to commend Boucher’s actions. Kiel wrote, “An old man could not reach down to tie his shoe so not only did Gage tie the one but he did the other as well; all with a smile.”

The random act of kindness soon gained traction on social media, going viral with close to 12,000 likes and more than 2,000 shares on Kiel’s original post. When Fox8 spoke to the Florida Publix employee, he didn’t see anything out of the ordinary about his actions, and hopes that his customer service will inspire others.

If anything proves that shopping at Publix truly is a pleasure, it’s Boucher’s actions.