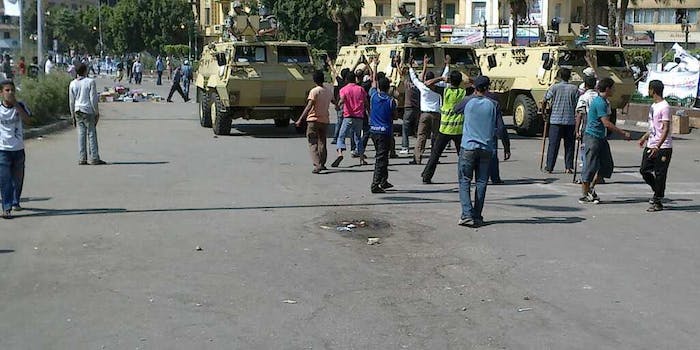 Instead of spending the first day of Ramadan fasting in the comfort of their homes, Egyptians flocked to Cairo’s Tahrir Square to peacefully protest against their interim government.

The sit-in protests hoped to put an “end to the military trials of civilians, the speedy prosecution of former regime members guilty of abuse, and the redistribution of wealth,” said the AFP in a news report.

And yet all they have seemed to do it agitate the Egyptian government.

According to Aljazeera, the military presence in the square Monday was meant to clear the crowds and open the roads to traffic. This was a different story on Twitter where journalists on the scene told stories of violence using the hastag #tahir.

“Vendors had their carts and wares trashed by military police and central security forces,” tweeted Sharif Kouddous, a journalist with Democracy Now.

“When they attacked us outside the square a man fell down and was beaten by sticks!” tweeted Farah Saafan, a video journalist with Daily News Egypt.

Atleast one person has been seriously injured from gunfire, reported Aljazeera, while others have been forced from the square.

Morale has been shaken but the people have not been defeated.

“SCAF can’t destroy the spirit of the revolution,” tweeted Themba Lewis, a photographer in Cairo. “They can only make it more formidable.”