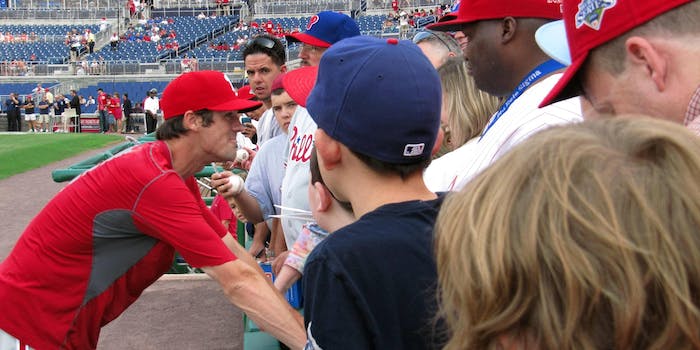 Where does the prosthetic limb heist rank in the annals of Philly sports fans being horrible?

Because I happen to be a typical Philadelphia sports fan, my poor wife has to leave the room (if not the city) when the Phillies, Eagles, or Flyers are on TV. Cursing and flying projectiles are de rigeur in our abode during these holy events.

The theft of a vet’s prosthetic leg outside the Linc during the Eagles 27-0 drubbing of the New York Giants is just the latest in what has been decades of intolerable, inexcusable, yet commonplace behavior by fans in the City of Brotherly Love. That Greek translation of the word Philadelphia is one of life’s great misguided aphorisms.

If you have seen the filmSilver Linings Playbook and recall that Robert DeNiro’s character was banned from Philadelphia Eagles games for fighting, you know that writer/director David O.Russell really did his research. Being banned from a Philadelphia sporting event is a badge of honor displayed for all to see at a local taproom somewhere in Fishtown or on Frankford Avenue.

Our home team behavior, as fans, is a rather shameful history. In no particular order, here’s a rundown of a few of the greatest moments in Philadelphia unsportsmanlike behavior.

In 1968, Frank Olivo became an impromptu Santa Claus for the last game of the season when the regular Saint Nick failed to show because the stadium was covered in snow. That snow quickly became snowballs which the irate fans—suffering through yet another miserable, losing season—pelted at Santa as he made his way across the field.

In 2008, Susan Finkelstein made the news for offering sex in exchange for tickets to the Phillies-New York Yankees World Series. After being arrested, the misguided fan said she intended to flirt with whomever answered her Craigslist ad describing herself as a buxom blonde in desperate need of tickets. But she says she never offered sexual favors as part of the deal. Finkelstein was eventually acquitted of the charges and later petitioned to be the host of the official Phillies blog, but was turned down.

While it is expected for fans to often boo opposing players, Philadelphia Eagles fans took such activity to a new high (or low) when they cheered Dallas Cowboys wideout Michael Irvin when he lay motionless on a stretcher after receiving a severe neck injury. Ironically Irvin was never angry at the fans for their classless move. In fact, he considered it a compliment.

“It was a compliment for Philly to cheer me,’’ said Irvin in an interview years later even though the injury ended his playing career.“Philly wasn’t cheering my injury. They were cheering my departure.”

4) They fight with the players (and lose)

Generally fueled by liquid courage, fans at Flyers games are wont to taunt opposing players, especially when they are relatively unprotected in the penalty box. I personally witnessed Boston Bruins’ Derek Sanderson climb into the stands and go at it with a fan, cutting the goal judge’s necktie with his skate blade. And then you have the 2001 game against the Maple Leafs, when a drunk Flyers fan, Chris Falcone, broke the glass of the penalty box containing Tie Domi who proceeded to beat the snot out of him.

5) They fight with mascots

In 1983, Chief Zee, an unofficial mascot of the Washington Redskins, attended a game against the Eagles at Veterans Stadium. While at the game, he was attacked by Eagles fans who  broke his leg, tore off his original costume, and left him hospitalized. The Philadelphia faithful were just upset their team had lost by 10 points to their divisional rival.

That’s just five out of perhaps hundreds of incidents showcasing a city that takes its sports just a bit too seriously. To be fair, having grown up and lived in the city for 26 years, it’s really a town of (sometimes) honest, blue collar, hard-working people who love their soft pretzels and cheesesteaks and expect a tad too much from their sports heroes. That said, this latest headline grabber, when an intoxicated fan stole the artificial leg of a busker outside Lincoln Financial Field, is small potatoes compared to the transgressions I have seen since my first Phillies game in old Connie Mack Stadium.

A word of advice to anyone attending a sporting event in Philadelphia: Root for the visiting team and I hope your insurance is up to date. You’ve been warned.

Photo by garyisajoke/Flickr (CC BY SA 2.0)