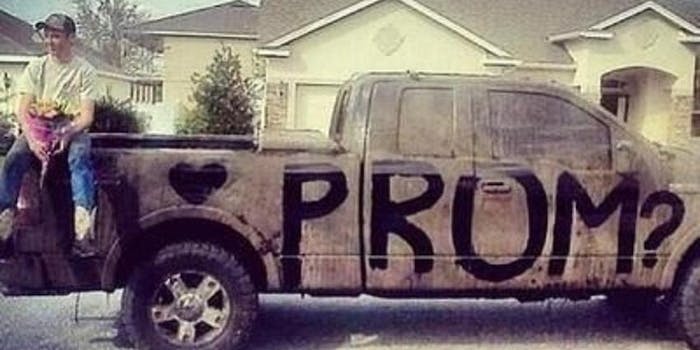 They're nausorable, if you will

If you were anything like me in high school, you were probably asked to prom at the last minute, by the closeted kid in your grade who wanted to take one last stab at pretending he was straight before going all-out in college.

Kids today, however, are a lot more creative. Apparently, they’re flocking to Instagram to show off the elaborate ways they’re asking their dates to prom. The hashtag for this trend? “#Promposals.”

According to a post on Instagram’s blog, which aggregates the “best” (I use this adjective very loosely) of the #promposals, high schoolers are going to great lengths to ask their friends/significant others to proms, and then documenting said promposals on Instagram. You’ll find the results either adorable, nauseating, or somewhere in between (nausorable, if you will).

Here’s Caleigh from Alabama dressed as a zombie.

This is, in my opinion, one of the more dangerous and irresponsible #promposals, because had I been Jacob and walked in on my girlfriend dressed as a zombie on a night other than Halloween, I would’ve immediately grabbed a baseball bat and bashed her brains in while screaming, “Die, undead scum, die.” But apparently Jacob said yes, which is great for Jacob and Caleigh, but doesn’t reflect well on Jacob’s zombie apocalypse survival skills.

And here’s @itslbeezy, who asked her date to go to prom by spray-painting the word “prom” on a sheep. OK, this one’s actually pretty great.