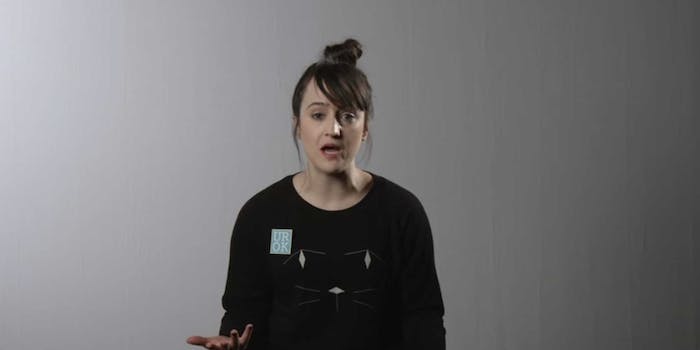 'Matilda' star Mara Wilson is one of many people sharing their struggles with depression for the Project UROK video series.

Warning: This article contains strong language that may be potentially triggering for some readers.

Jenny Jaffe first thought about ending her own life when she was 10 years old.

She remembers feeling anxious and depressed at a very young age, and she says had moments where she truly believed life was not worth living. She was lucky enough to have a support network of friends and family to help pull her through, but eventually, she realized not all young people struggling with mental illness were so fortunate.

That’s why Jaffe, now 25, started Project UROK (pronounced like “you are okay”), a nonprofit organization to support and create a community for teens grappling with mental issues.

“I think that every community has a different relationship to mental health and mental illness,” Jaffe told the Daily Dot via phone. “But I can’t think of any community in America where it’s something people can openly talk about.”

Project UROK is a collection of YouTube videos—some professionally shot, some submitted by amateur community members—that feature people speaking frankly about what it’s like to deal with mental illness as a teenager. Some of the participants are adults reflecting back on their rocky adolescence, while some are actual teens currently in the throes of crisis.

One high-profile contributor is Mara Wilson. She’s best known for her roles as a child actress in Matilda and Mrs. Doubtfire, but as an adult she left Hollywood behind to become a writer in New York. Wilson has been vocal about her mental struggles, and even hosts a live show periodically called “What Are You Afraid Of?,” which deals with the topic of anxiety.

Wilson is a close friend of Jaffe’s and created a Project UROK video to share her perspective on the importance of de-stigmatizing mental health.

“I think we need to change our attitude about mental illness,” Wilson told the Daily Dot via email. “It needs to be taken as seriously as physical illness. In my experience, being open about it and owning it, not being ashamed is important. Those of us in the public eye should lead by example. For those not, realizing how many people also live with mental illness can be helpful.”

The overarching goal of the project is to make teens feel like they’re not alone in their struggles with depression. Jaffe and Project UROK Vice President Sarah Hartshorne wanted young people to have a place where they could be 100 percent honest about what was going on in their lives.

“When I was a teenager, all I wanted to know was that I wasn’t alone, and I wouldn’t be ‘like this’—incapacitatingly depressed and anxious—all my life,” Wilson said. “Every single UROK video lets teens know that. The only way I got help when I was younger was by reading about OCD in books and online, so I have no doubt this will help so many people.”

“When I was a teenager, all I wanted to know was that I wasn’t alone.”

Hartshorne admitted that before she began working on the project, she didn’t believe she had suffered from mental illness in the past. But as she started hearing people describe their various symptoms in their videos, she realized that she had likely experienced many of them herself.

“[Mental illness] doesn’t look like a black and white commercial with sad music playing behind it,” Hartshorne told the Daily Dot. “The project is something that I think is good for anyone, even if you don’t immediately connect with it.”

That said, Project UROK by no means meant to serve as a replacement for therapy. Jaffe understands that access to mental health care can be costly, and she didn’t want to draw in teens with her project, only to leave them feeling left without resources. That’s why the Project UROK website features an exhaustive list of websites, hotlines and organizations to reach out to, depending on their symptoms.

“You need to be able to admit you need help and then have resources to seek help,” Jaffe said.

While she continues to grapple with anxiety, depression, and OCD, Jaffe is buoyed by a rich social life, a devoted boyfriend, and the knowledge that she could potentially be helping save lives.

“We just wanted to give people a platform and a space to tell their stories,” she said. “There’s nothing more valuable than making somebody feel heard.”