The global surveillance industry is a monstrous thing.

It’s a tangled web—one that few truly have the bandwidth to explore.

“By collecting a variety of documents and datasets about the surveillance industry into a single, comprehensive archive, the [SII] offers one of the most complete overviews of surveillance tech being sold around the world,” said M.C. McGrath, founder of Transparency Toolkit. 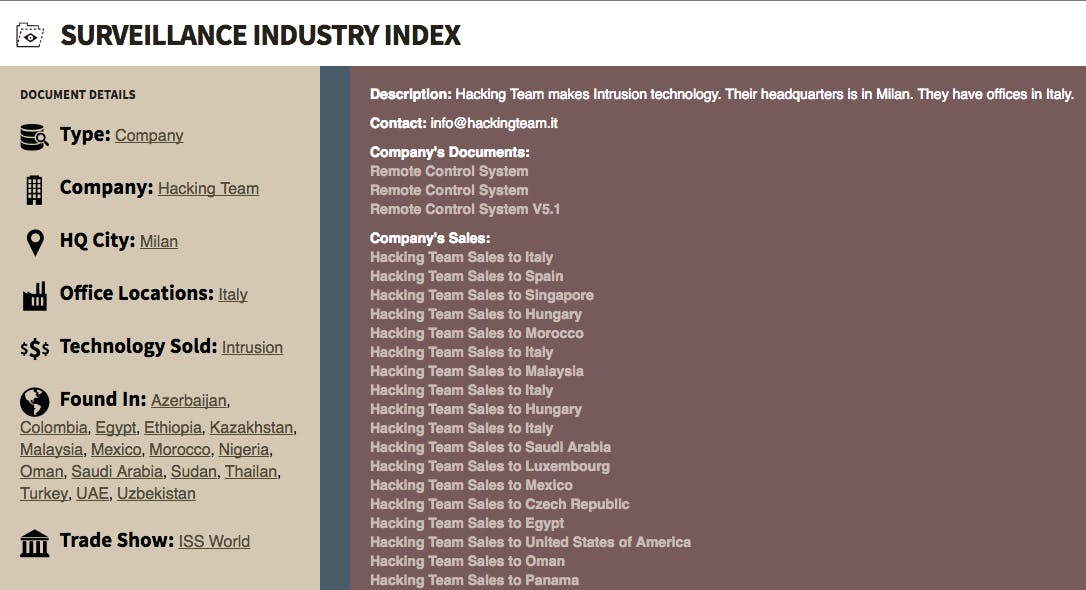 Following release of the database, a report titled “The Global Surveillance Industry” offers readers a fresh look at an industry that recognizes few borders and often disregards the concerns of human rights groups while providing dictators powerful NSA-like capabilities solely for the purpose of tracking political dissidents. The goal of making all this information accessible, PI explains, is to help “the public, activists, journalists, and policymakers better understand the modern surveillance industry and technologies.”

Edin Omanovic, a research officer at PI, hopes the database and accompanying report will shine a light on a secretive industry feeding the demands of governments for more invasive surveillance capabilities. “State surveillance is one of the most important and polarizing issues of our time, yet the secrecy around it means it’s a debate lacking reliable facts,” he said.

“Understanding the role of the surveillance industry, and how these technologies are traded and used across the world, is crucial to not only understanding it, but to foster accountability as well as the development of comprehensive safeguards and effective policy,” Omanovic added.

In a statement, PI’s researchers concluded that without the proper legal mechanisms in place to restrain the now-unrestricted flow of surveillance technology, the global surveillance industry will undoubtedly continue to “undermine privacy and facilitate other human rights abuses, as well as undermine international security.”