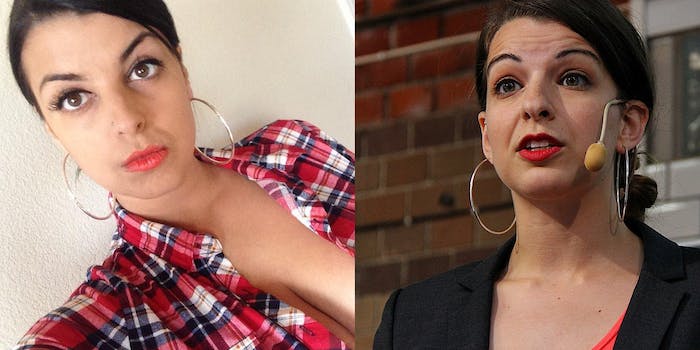 Is it parody, as Gamergate supporters claim? Or is it something far more cruel?

It has been said that imitation is the sincerest form of flattery. But in the case of #BoobFreq (NSFW), a controversial and extremely NSFW channel that purports to parody feminist culture critic and Gamergate shibboleth Anita Sarkeesian’s Feminist Frequency, that is decidedly not the case.

I usually don’t share the really scary stuff. But it’s important for folks to know how bad it gets [TRIGGER WARNING] pic.twitter.com/u6b3i0fysI

“Go ahead, screen capture this and tweet it you piece of shit” ummm… ok. I’m not afraid of strawman "rebuttals". pic.twitter.com/8B74uYJOOU

Kora first got the idea to impersonate Sarkeesian a few weeks ago, when her husband saw her wearing a plaid shirt and pointed out that she bore a resemblance to the critic.

“He said, ‘All you need is the hoop earrings and the lipstick.’ So I went out and I got them, and I went on cam like that,” she told the Daily Dot in a phone interview.

While on cam, Kora attempted to take her Sarkeesian impression beyond the physical resemblance. While performing various solo sex acts, she tried to mimic Sarkeesian’s tone of voice and demeanor.

“Some people say when [Anita] is on and doing her show, it looks like she’s reading from a teleprompter,” Kora said, “so I tried to look like I was reading off a teleprompter.”

Kora, who says she is critical of contemporary feminism, also took aim at Sarkeesian’s feminist views, “making stupid jokes like, ‘Oh, I’m crushing the patriarchy with my big boobs.’”

Within the first 24 hours of Kora’s show, Gamergate supporters started embracing #boobfreq, tweeting ironic hashtags like “#SexPositiveAnita” and memes of Kora dressed as Sarkeesian with her plaid shirt halfway unbuttoned, revealing her ample breasts. One meme included the hashtag, “Believes that toxic masculinity belongs all over her huge fucking tits.” 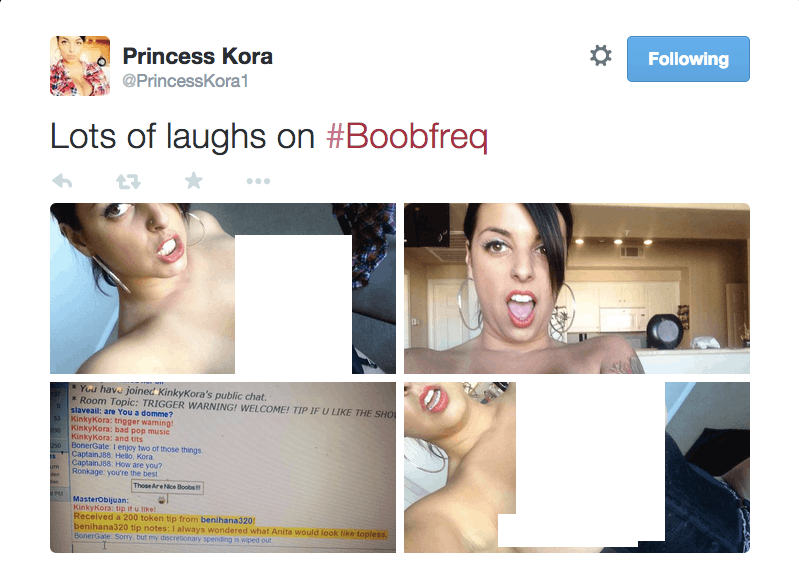 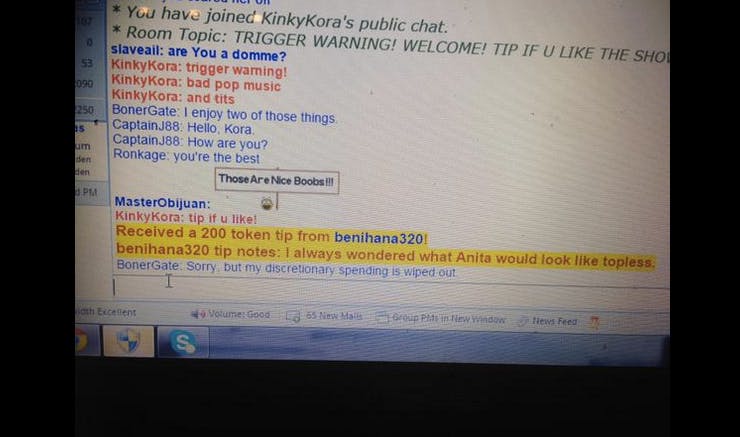 By appearing on camera as a pornified version of Sarkeesian, Kora says she is effectively satirizing what she perceives to be Sarkeesian’s radical feminist and anti-sex-work views. While Sarkeesian has said little on the record about sex workers’ rights, she drew criticism last year for referring to sex workers in video games as “prostitutes” rather than the more politically correct term “sex workers.”

In her videos, Sarkeesian has also referred to sex workers as “prostituted women,” a semantic choice that many sex workers believe denies women in the industry any agency. (Sarkeesian did not reply to the Daily Dot’s requests for comment.)

Kora said that her cam show was intended to skewer Sarkeesian’s view of sex workers as “oppressed or exploited.”

“I’m a formally educated woman on camera [who] is having a good time,” she said. “I’m mocking the idea that sex workers are oppressed and acting under false consciousness.”

Given Sarkeesian’s history as a victim of gendered harassment, many feminists and Sarkeesian fans don’t see Boob Frequency as a “parody” at all. They see it as a way of supplying further ammunition to Gamergate supporters who hold Sarkeesian up as a representative of all that is wrong with modern-day feminism, or as a means of exploiting a woman who has made a career out of fighting the exploitation of women.

Regarding Sarkeesian’s anti-sex work comments, Romano said, “I honestly don’t think she [Sarkeesian] criticizes sex workers, but the way the games are portraying them. I think she would argue that the games are denying sex workers the agency they would have in reality.”

In a sense, the debate over whether Boob Frequency can be classified as “satire” or a different, colder, meaner genre entirely is reminiscent of the parallel debate raging in the blogosphere about the artistic value of the cartoons published in Charlie Hebdo, the French satirical publication that was attacked by Muslim terrorists for publishing cartoons of the Islamic prophet Mohammed.

While many on Twitter rallied in support of Charlie Hebdo and the right to free speech after the attack, which left 12 people dead, others were more critical of the publication’s claim to use parody to battle censorship. They argued that the cartoons were more exemplary of Islamophobia than “satire.”

“White men punching down is not a recipe for good satire, and needs to be called out,” Jacob Canfield wrote on the blog Hooded Utilitarian. “People getting upset does not prove that the satire was good.”

Nonetheless, Kora acknowledged that some Gamergaters might be tuning into her channel not because they appreciate its satirical elements, but because they loathe Sarkeesian so much that they enjoy seeing her—or self-identified feminists, or even women in general—sexualized without their consent.

“That’s the only thing that perturbs me about the whole thing,” Kora said, referring to the prospect of Sarkeesian detractors using her cam show as ammunition for more gendered attacks against her. “I want to get across that that’s not my aim.”

Despite her now-enormous Gamergater fanbase and her use of the Gamergate hashtag on Twitter (not to mention such Gamergate-friendly terms as “SJW”),  Kora said she also didn’t feel comfortable serving as a figurehead for the movement. While she felt “aligned” with the movement, particularly the “libertarian values [of] freedom of speech, and being against censorship,” she didn’t want to be a Gamergate figurehead—mostly because, as she freely admitted, she doesn’t consider herself a gamer.

“I make jokes about that, in the cam thing,” she said. “I say, ‘Much like Anita, I’m not a gamer.’ People say she doesn’t actually play games. I don’t know if that’s true or not. But I don’t know anything about video games.”

But even as she continues to invite criticism for blurring the lines between parody and something else entirely, Kora said she would relish the chance to debate Sarkeesian about feminism and sex-worker issues.

“I’d totally welcome the opportunity to have a dialogue with her,” she said. “I’d ask her what her views on sex work are, and I’d want to explore them and say, ‘Hey, parody aside, why do you refer to us as prostituted women? Do you know sex workers in real life?’ I’d try to educate her [on sex work].”

But if Boob Frequency is intended to satirize Sarkeesian’s channel, rather than to exemplify what Jacob Canield called “punching down” at a woman who has been threatened, attacked, and verbally abused more than most people have in their lifetimes, not even Princess Kora herself is clear that all of her fans are in on the joke.

Photos via PrincessKora1/Twitter and Susanne Nilsson/Flickr (CC BY SA 2.0) | Remix by Jason Reed