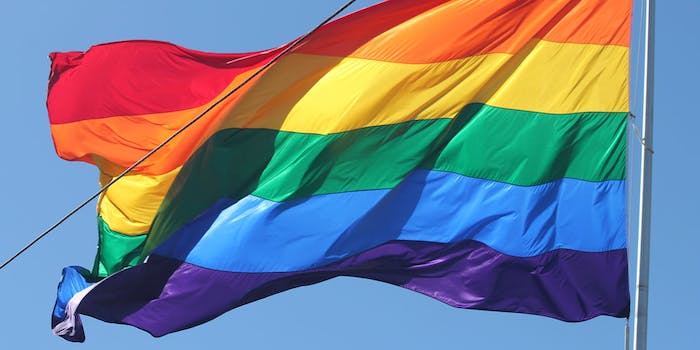 Why don’t we have a pride flag emoji?

The flags are symbols of solidarity to oppressed populations around the world.

When Ken Carlyle heard the news about the Orlando massacre, he was devastated and angry. So the 49-year-old insurance broker decided to channel that anger into something positive.

“As a gay married man, I send texts and messages using the rainbow or the gay couple emoji,” Carlyle told the Daily Dot via email. “As I sent a text to a friend discussing Orlando, it struck me that there wasn’t a gay pride flag, or a transgender flag, either. That seemed outrageous.”

Carlyle pointed out that the gay flag and the trans flag are almost universal symbols for solidarity around the world. “One of the things that unites us globally is our near-universal feeling of being second-class citizens—overlooked, ignored, and overshadowed,” he said. “The political climate and acceptance of the LGBTQ community in the United State has improved, certainly, during my lifetime. But as the madman in Orlando proved, hate towards LGBTQ persons is still quite readily apparent. We deserve representation of our community, even in this small way.”

So Carlyle created a Change.org petition to ask Apple to make pride and trans flag emoji.

And why Apple? Well, Carlyle said he and several of his friends have already submitted a proposal to Unicode, which creates the design standard for emoji, to add a pride flag, but hasn’t heard a response.

Last year, Unicode actually considered a formal proposal to add the pride flag at their consortium, since Facebook and Twitter already had designated pride emoji. But nothing ever came of that discussion. Carlyle hopes his petition will reignite the conversation. He notes, “I also wanted to petition Apple because if enough users signed on to that petition, Apple could put its weight behind the requests to Unicode and make it happen.”

Carlyle launched his petition on June 16 and hopes to reach at least 100 signatures to gain attention to his cause. Carlyle added, “Unicode was carefully considering the issue, so I think a concerted effort via social media and the petition on Change.org could prompt swift approval of the pride and trans flag emoji.”