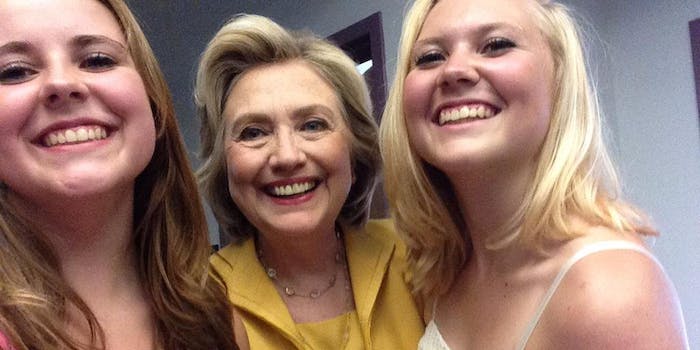 Emma and Addy Nozell only have four candidates left.

What’s cooler than a selfie in front of a historic monument? A collage of selfies with every 2016 presidential candidate.

New Hampshire teenagers Emma and Addy Nozell, 15 and 17, respectively, are trying to achieve that record feat. They’ve photographed themselves with a surprisingly large number of the men and women running for president, and their goal is to get a casual selfie-style photo with every candidate running in all 50 states. Lesser-known candidates are not on the girls’ radar—sorry, Zoltan Istvan.

#2 @LincolnChafee
at the forth of July parade in Amherst pic.twitter.com/SpzhV08Pg2

WEE GOTT HILLARY!!! #HillaryInNH #Hillary2016
OH MY GOD I CANT GET OVER THIS ONE pic.twitter.com/by2PQC5RoC

The sisters are uniquely positioned to see such a project through to completion. Their home state of New Hampshire hosts the first presidential primary, so candidates from both major parties treat it like a political Mecca during the early campaign season.

The Nozell girls have attended many of these events and waited afterward to meet the candidates for a photo. Emma is always the one to take the picture.

“I have an [iPod] that only has a self-facing camera so it’s pretty much only meant for taking selfies,” she told the Daily Dot.

The girls also have a strict no-selfie-stick rule. Out of respect for the candidates, the girls take their selfies at arm’s length.

Emma also shared tips for taking the best selfies with famous people, such as, “Get up there and don’t be afraid to ask,” as well as, “Horizontal pictures work the best,” and, of course, “Smile.”

Wendy Thomas, the girls’ mother, told CNN that she and her husband “fully endorse this challenge.”

“Selfies are here to stay and it looks like the candidates are doing a good job of being gracious about taking them,” she said. “My daughters get a selfie and we get critical thinkers.”

Naturally, the girls are primarily interested in souvenir photos with potential world leaders, but Emma told us that they also learned valuable information about each of the people who could become our next president.

“We get to listen to the early stump speeches and we get to see how the speeches change, what works, what doesn’t work, and what they take out or put in,” she said. “It’s really interesting to say the least.”

“I can’t vote for the primary but I will be able to vote in the general election,” Addy told us. “How can I vote for someone if I don’t know about them or what their plans are?”

Once they’ve successfully caught them all, the girls plan to expand the scope of their selfie quest to include other famous politicians and public figures.

“We will be trying for the vice-presidential candidates when they are announced and, of course, there are some pretty cool endorsers in town,” Addy said. “Yesterday we got ice cream and a selfie with Ben of Ben and Jerry’s who was supporting Bernie [Sanders].”

At press time, the girls only had four candidates left on their list.