The bizarre, fetishistic world of ‘pregnant mommy’ games for kids

Why are these apps so damn popular—and who are they really meant for?

Games that socialize little girls to care for babies, whether using dolls or apps, have been around forever. But there’s a new trend of mobile games that feature main characters who are visibly pregnant.

It’s a bit like Kim Kardashian: Hollywood for pregnancy fetishists.

While these apps range widely in terms of theme and narrative, there’s one subgenre that clearly dominates them all. “Pregnant mommy cleaning” games typically revolve around a pregnant character who, for whatever reason, desperately needs help cleaning her clothes, her bathroom, or, in some cases, herself.

Pregnant Mommy Clean Room is typical of this genre. So are Messy Pregnant Woman, My Mommy Newborn Babycare Laundry, Pregnant Barbara Bathroom, and Pregnant Princess Washing Clothes. Because small children love nothing more than cleaning toilets while pregnant women stand by and watch. 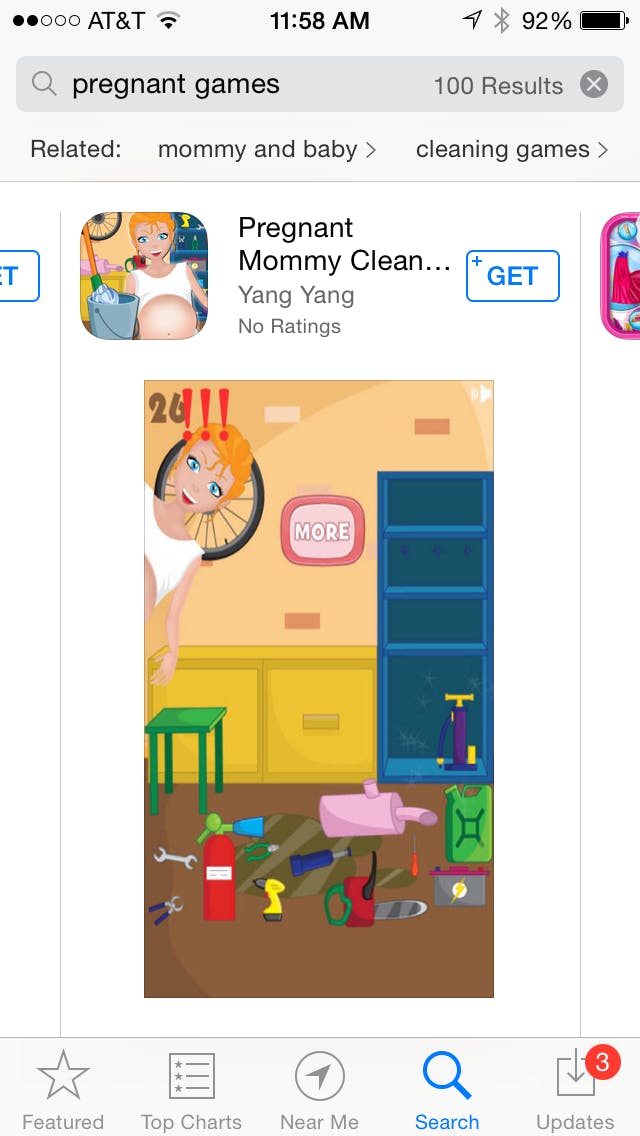 The games aren’t limited to a perfect mixture of cleaning and pregnancy, though. There are several games that point out when or where the pregnant character is due to give birth, as in Mommy’s Christmas Baby or Baby Hospital Adventure. For the British pregnancy enthusiast, there’s Mummy’s Valentine Baby. 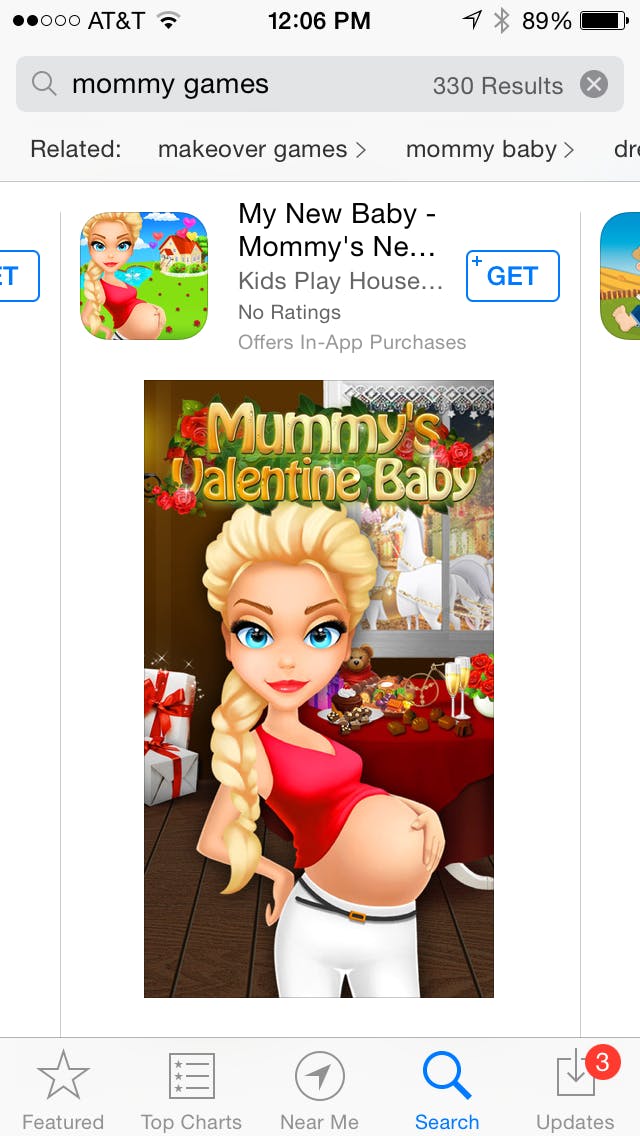 You can also treat mom to some Barbara Pregnant Shopping or to a makeover with Expecting Mommy Dress Up and Pregnant Mommy Makeover.

Humans and lowly peasants aren’t the only ones who get pregnant on the games, of course. For the A-list, there’s Celebrity Mommy’s Newborn Baby Doctor, where you can help take care of an anonymous “celebrity” during her pregnancy—and, eventually, her offspring.

In the great tradition of ripoff Frozen games, there are many opportunities to live out Elsa and Anna’s morning sickness firsthand with titles like Ice Mommy’s New Baby and a series of games in which someone named Barbara (who is just Elsa with brown hair) has preggo fun: Barbara Womb Baby Play, Barbara’s Birth Surgery, and the aforementioned Pregnant Barbara Bathroom. 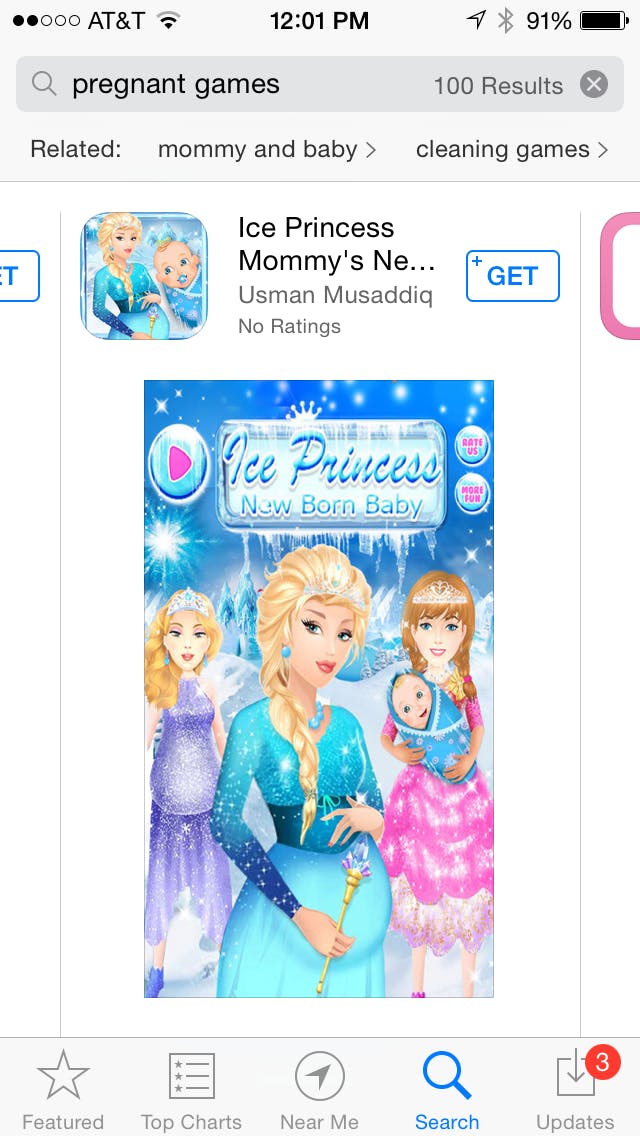 One game, Pregnant Princess Washing Clothes, manages to cover all of these bases.

But creepiest of all are games that allow players to perform a C-section on the pregnant characters, like Cesarian Birth [sic] and a mashup called Pregnant Mermaid, which features an unconscious pink-haired sea lady wearing a gas mask over her face while an anxious-looking crab dances on her boob.

“Now you have to take care the pregnant mermaid who just gave a birth to a newborn baby mermaid,” reads the App Store description—sics all around—for Pregnant Mermaid. “Give her the pills, check her baby if it is fine and after the baby is born take care of him!” 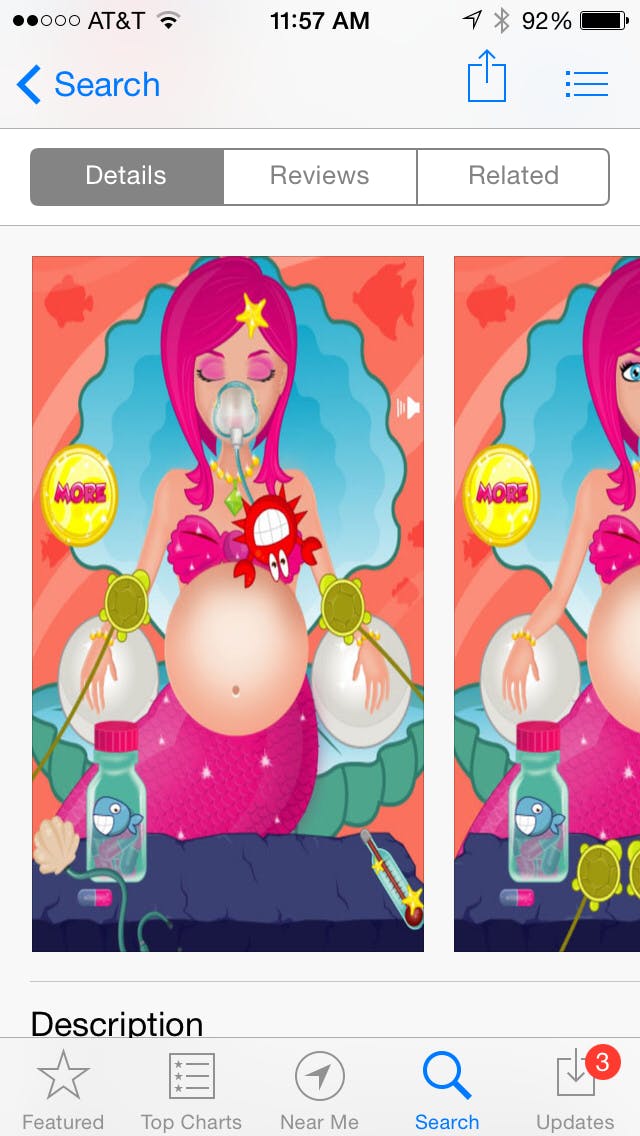 The whole game happens so quickly that you don’t have time to realize what just happened, and it’s impossible to win. Just like being a real mom!

I played Pregnant Mommy Clean Room and it was pretty much exactly what you’d expect. You start the game in a room with trash strewn all over the floor, and you have about 10 seconds to put everything in its right place. Pregnant Mommy leans in about halfway through and whines, “Hurry up,” which means that the game is over. The whole game happens so quickly that you don’t have time to realize what just happened, and it’s impossible to win. Just like being a real mom!

Moving on, I tried my hand at Messy Pregnant Woman. Following a flurry of ads, a smiling pregnant lady in a bathroom pops up on your screen, apparently psyched that you’re about to take off her clothes and scrub her mud- and/or feces-caked limbs with what strongly resembles a horse-grooming brush.

As I plucked twigs out of her skull with the conveniently supplied tweezers, I couldn’t help but think, My god, what happened to her? Is that… is that blood?! Cleaning up a pregnant assault victim and/or sploshing fetishist: good, clean fun for the whole family. 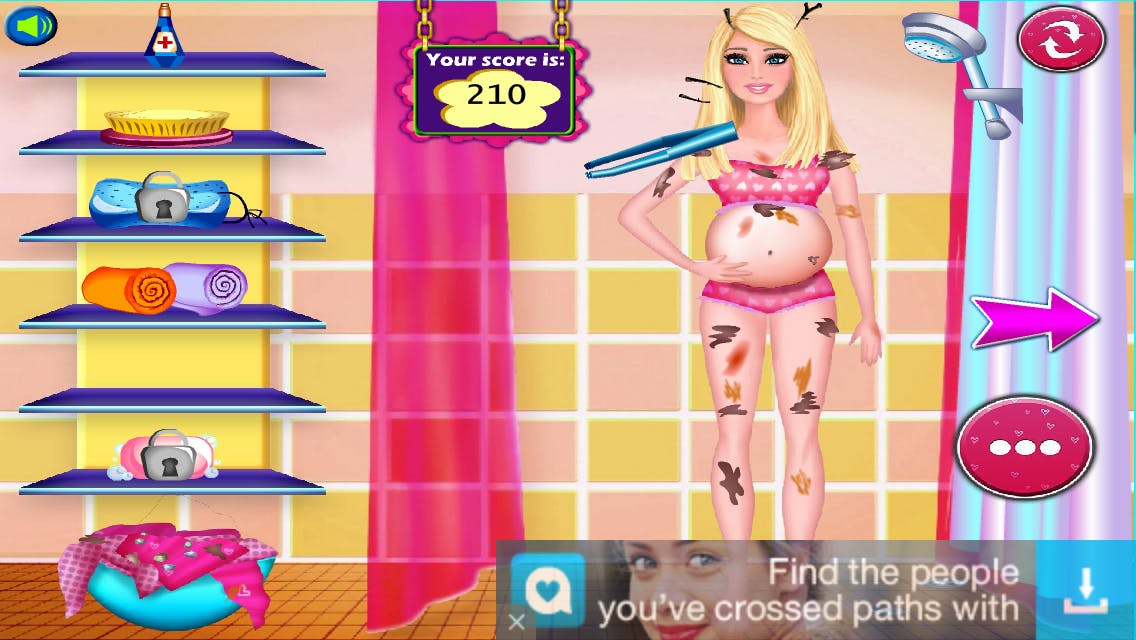 Because these apps straddle the thin line between bizarre children’s game and X-rated fetish fantasy, it’s unclear precisely who the target audience is. Sure, they’re marketed to little girls; they incorporate traditional girlie interests like princesses and shopping. But the apps’ obsession with rotund bellies and filthy servitude, not to mention invasive surgical procedures, certainly appears to lend itself to fetishism.

So are little girls blithely sitting in their cubbies playing these “pregnant mommy” games, or are they predominantly targeted at middle-aged men with dual princess and big-belly fetishes?

It’s possible that the apps could be targeted at a much wider audience than just anatomically curious little girls and skeevy older dudes.

Sure, little girls and men are obsessed with the idea of pregnancy (albeit for entirely different reasons), but they’re not the only ones. In August 2014, an anonymous woman wrote an essay for Thought Catalog detailing her own fetish with being pregnant. She wrote, “Without my fetish, I am empty inside, and looking at my children only reminds me painfully what it felt like when it was good.”

Ultimately, you don’t have to be a pregnancy fetishist or an 8-year-old Frozen fan to be fascinated by these games, which perhaps helps to explain why they’re so popular. As it turns out, “pregnant mommy” is a fantasy world for the kid, and the fetishist, in all of us.