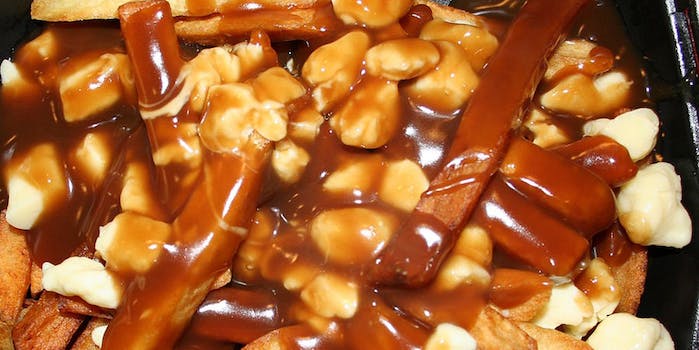 5 videos that will make you crave poutine

The dish consists of fries topped with gravy and cheese curds—and it's more delicious than it sounds.

When you think of Canadian cuisine, you tend to think of food that falls on the less healthy side of the dietary spectrum: a dozen Tim Horton‘s donuts, an overstuffed smoked beef sandwich from Montreal, or ginger beef from Calgary. Poutine, a concoction that marries potatoes, cheese curds (chunky parts of soured milk), and gravy, is right on top of this list.

No Canadian foodstuff report would be complete without a video by Harley Morenstein of Epic Meal Time fame. A former schoolteacher turned YouTube chef, Morenstein knows his way around any dish that tips the carb scale into overload. In the above clip, he takes poutine and turns into dumplings. Surprise, surprise—the recipe calls for lots of bacon.

If poutine is a dish best consumed after pounding back a few too many Molsons, perhaps it’s best to prepare it drunk as well. Hannah Hart of My Drunk Kitchen shows us how to do it, whipping up her take on poutine while downing several glasses of the Canadian version of a Bloody Mary.

For a taste of some classic poutine, let’s visit Montreal Poutine, a French-Canadian eatery in Quebec that offers many versions of the dish, including one with regional favorite smoked beef on top. These people are real poutine purists, refusing to top their poutine with anything other than fresh, local Frommage Beaucronne.

You know a dish has jumped the shark—or the table, as the case may be—when it lands on the McDonald’s menu. A brave Toronto native named Ken Domik drove across Ontario sampling new menu items from fast food joints, including a poutine dish at Mickey D’s. Spoiler alert: It was a rather pale imitation of the real thing.

Poutine is the perfect food to be consumed in large quantities, which makes it ideal for competitive eating challenges. Last October, a group of professional munchers gathered at Smoke’s Poutinerie Poutine Eating Championship to compete for the grand prize: $6,000, to whoever could stuff the most poutine in his piehole in the allotted time. The lucky winner was Matthew Stonie, who ended up eating 14.7 pounds of poutine in 10 minutes.