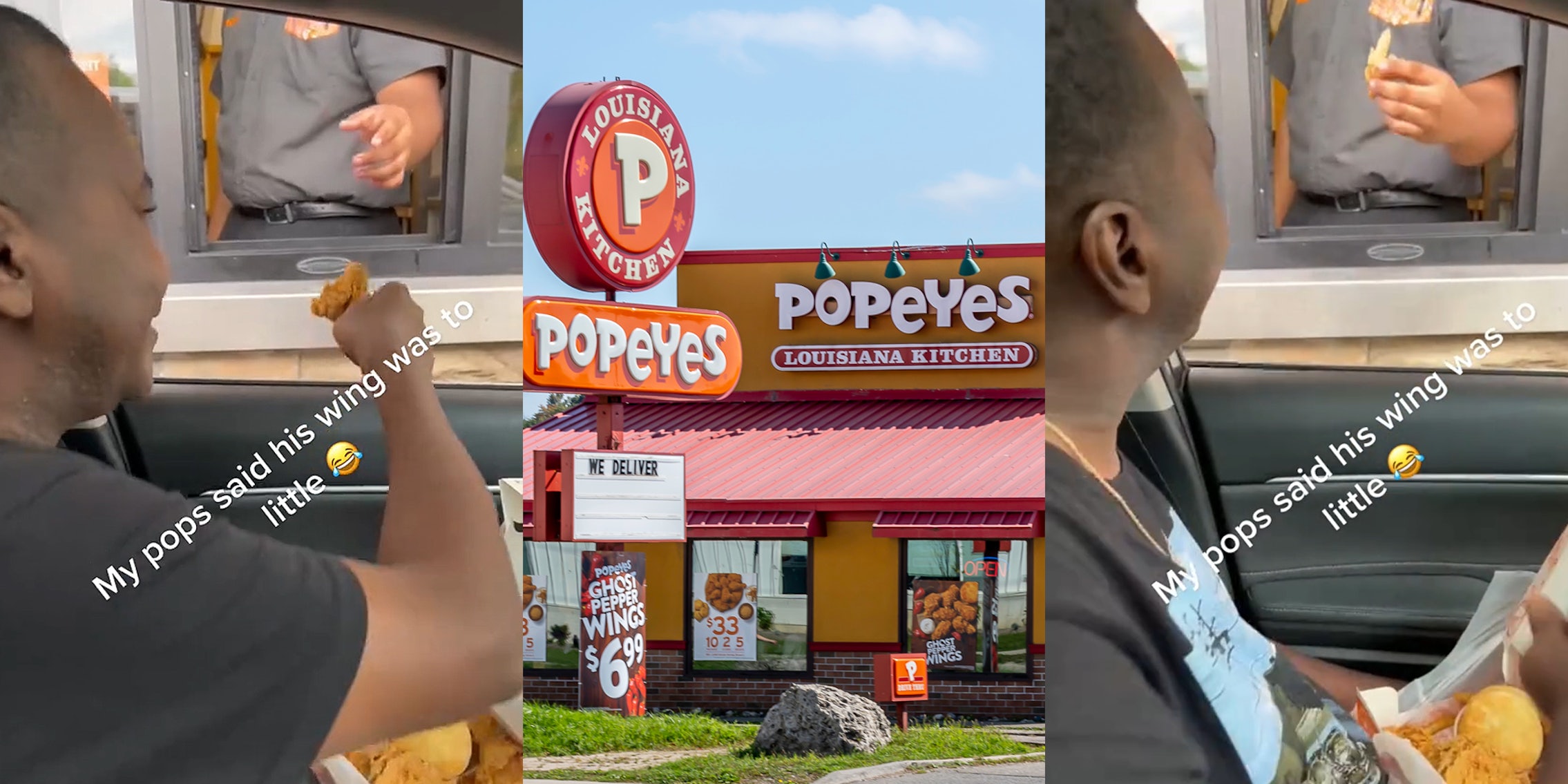 ‘At least give me two of ‘em’: Popeyes customer gives back wing because it’s ‘too little’

A viral video shows a man returning a chicken wing that he deemed too small back to the Popeyes drive-thru employee.

Popeyes is known to have an extremely ardent fan base who will go to extreme lengths to get themselves some of the fast-food chain’s chicken. The Daily Show even reported on a stabbing that took place over a sandwich. TikToker Max Evans (@max3evanss) posted a clip showing his father in his car, holding a box of Popeyes chicken that he just received from the drive-thru window.

His father returns a piece of chicken back to the drive-thru employee, and as he rummages through the rest of the box, he says: “At least give me two of ‘em.” The text overlay of the video explains that the TikToker’s “pops said his wing was too little.”

The video amassed 1 million views since being posted on Oct. 5, and the comments section is flooded with viewers who find the man’s actions extremely relatable and hilarious.

“Please someone give this man his own show,” one said, clearly amused at the man returning his chicken. Another was particularly entertained by the fact that the Popeyes employee actually accepted the solitary wing that the man deemed too small. “Not they actually took it back….” the user said in disbelief.

“He checked before he left cause it clearly wasn’t the first time it happened,” another pointed out, sympathizing with the man and his need for large chicken pieces.

A few viewers identified with the dad’s behavior of returning chicken to a drive-thru employee. “Nah this the type of embarrassing stuff my dad would do,” said one user. “All pops the same lol. My dad stay mad at drive thru workers,” agreed another.

One user admitted to returning chicken from a recent order. “I got the two piece deal on Tuesday and they [gave] me two small pieces I parked my car and went inside,” they said.

Another user, who didn’t seem surprised by the small wing, also called out Popeyes, saying, “I stopped going [too] expensive for the quality they give you.” Another recommended people try out the competition. “I did this at Kfc. They gave me more,” the person claimed.

The Daily Dot reached out to Max via TikTok comment.