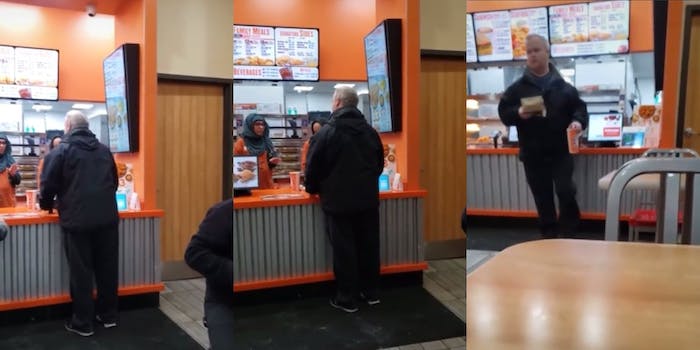 ‘Imagine being THIS upset about chicken tenders’: Male ‘Karen’ screams at Popeye’s employees

Video footage shared on TikTok shows a man dubbed a “Karen” screaming at two Popeye’s employees—apparently over his order of chicken tenders.

The footage, posted earlier this week by user @ghettogarage.tv, has received about 1.7 million views. TikTokers, of course, love a wild Karen video.

Although Popeyes is known for its 12-hour marinated chicken and some of the best fried chicken in the south, many would argue that it’s not worth screaming in public for. The male Karen clearly didn’t agree.

He leans over the front counter and screams “give me the fucking tenders” into the employee’s face. Another employee appears to say something to try to calm him down, but his comment is inaudible in the footage.

The two employees stand calmly behind the counter as the Karen again yells, “Give me the fucking tenders.” When it seems like he’s not going to get the chicken tenders just yet, he yells, “Get me your fucking manager then.”

Viewers were disgusted at his outburst.

“Imagine being THIS upset about chicken tenders,” one viewer commented. A different wrote, “Another loudmouth American crying over his fast food.”

Another user said, “I will never understand how some people get so mad over food.”

Other viewers agreed, and some questioned if the chicken tenders were worth the meltdown.

“Dayum… are they that good??” one person asked, while another commented, “Must be awesome tenders.”

The next cut of the video shows the man walking away angrily with a bag of what must be chicken tenders. It’s unclear if the man spoke with the manager or not.

The TikTok creator who shared the video, @ghettogarage.tv, did not respond to the Daily Dot’s request for comment.