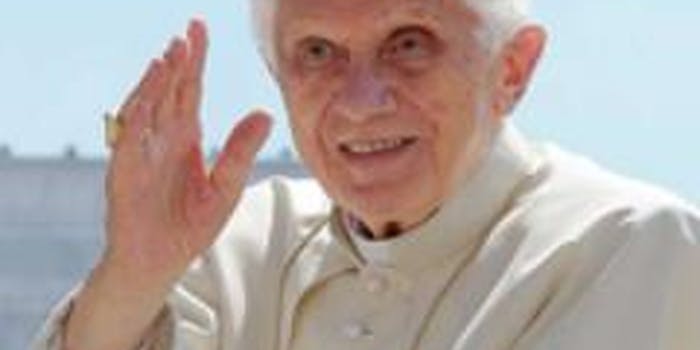 Following a weekly address at the Vatican, Pope Benedict XVI, surrounded by cameras, slowly tapped out his first 140 characters.

With the touch of an iPad, Pope Benedict XVI officially became the first pontiff in history to tweet.

Following a weekly address at the Vatican, the Pope, surrounded by cameras, slowly tapped out his first 140 characters.

“Dear friends, I am pleased to get in touch with you through Twitter. Thank you for your generous response. I bless all of you from my heart,” he wrote. Within hours, over 37,000 users retweeted the historic tweet.

“@Pontifex Thank you. Bless you too. And now please tell us you accept gays as a biological reality, a woman’s right to choose, & condom use.” user Michael Thorner commented.

The Pope’s Twitter account, @Pontifex, was created in February 2012 and verified by the Vatican on Dec. 3. Close to 800,000 Twitter users followed him, despite his first tweet not coming until Dec. 12. As his number of followers grew, so did the amount of negative tweets directed toward him, the Catholic faith, and religion in general.

Moments after his first tweet, another message was sent out by @Pontifex, to the tune of over 5,000 retweets.

“How can we celebrate the Year of Faith better in our daily lives?” it read.

Twitter users responded with a swarm of answers, ranging from sincere to downright cynical.

“@Pontifex by maintaining god love thru our actions with other people as well as being open to new views of god faith,” user Brad Essex suggested.

Pope Benedict XVI has since sent out three additional tweets, each one receiving thousands of retweets and replies.

So far, the Pope has yet to personally respond to the messages of any Twitter users.