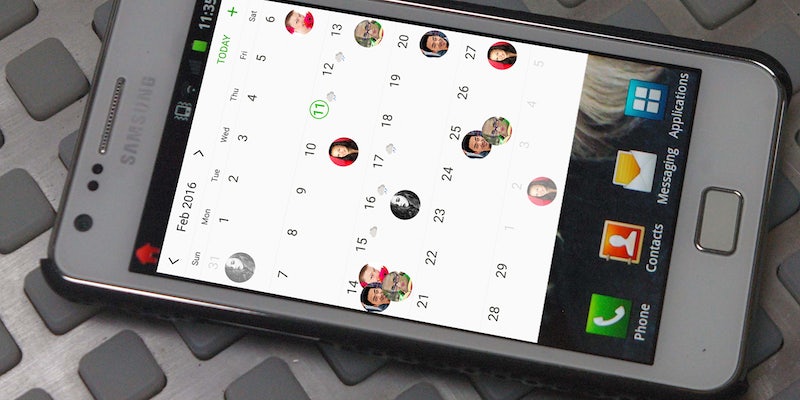 How polyamorous couples use Google Calendar to schedule their love lives

Being 'calendar-sharing committed' is an important relationship stage.

All relationships have significant milestones. The first kiss. Meeting the parents. Sharing a Netflix log-in.

For Amanda*, Amanda’s husband, and Amanda’s girlfriend, it was sharing their Google Calendars.

Amanda and her husband of five years began exploring polyamory about one year into their marriage. There are roughly two million non-monogamous couples in the United States, according to Psychology Today, which cited Kelly Cookson, an independent academic, placing the number somewhere between 1.2 and 2.4 million. Including “satellite lovers,” as Cookson called them, in that figure bumps it up to 9.8 million non-monogamous folks. And all those people—boyfriends, girlfriends, husbands, wives, playmates—need to keep organized.

Amanda and her husband work full-time jobs and have packed social calendars—and that’s on top of pursuing sexual relationships with others. A simple, private way to stay sane is by using a communal calendar with their other partners. “Starting a shared calendar with my last girlfriend felt like a major relationship milestone,” Amanda told the Daily Dot. “We hugged excitedly and felt giddy when we reached that decision because it felt like an organic next step in the relationship. We were ‘calendar-sharing committed.'”

When it comes to grand relationship gestures, becoming ‘calendar-sharing committed’ might seem insignificant. However, sharing an online calendar is meaningful to poly folks in that it reflects a desire to sync up lives and express commitment. “It felt very romantic and loving, and I’m so glad we made that call,” Amanda said of her decision to share calendars with her ex.

This sentiment was shared by Michel, who tweeted this poem—a haiku, actually—about calendar sharing a couple years ago:

Michel (who uses the pronouns ‘them’ and ‘they’) is polyamorous, and shares calendars with a husband and a boyfriend. The method is absolutely essential, they said, to ensure that not only their love lives but also their day-to-day lives run smoothly. “Talking about schedules gets us pretty far, but the complexity of self-employment, volunteer activities, two kids, and two partners makes writing it down in an accessible place absolutely necessary,” they wrote in an email, continuing:

“In that way that good boundaries make happy children, we’ve found that good scheduling makes spontaneity possible. When there’s clearly delineated time for living and obligations, there’s more time for walking to get ice cream and surprise gatherings with friends.”

Amanda and her ex-girlfriend were pretty practical in how they used their calendar, but that didn’t force out whimsical romance. Amanda used all-caps and exclamation points to indicate her enthusiasm for plans and dates. “It added a formality to everything that felt lovely, and it made … our lives much easier,” she explained.

Formality might sound dry—unsexy even—but it can be something else entirely: considerate. Take Margaret Corvid, for example, who has two partners: her husband Bob and her secondary partner Bunny. She thinks the detail-oriented focus of a shared calendar is a great way to express her love for both of them because, in the plainest of terms, she is being reliable with her time commitments.

“[One] thing that screws up relationships is just being a flake. And I do that all the time—I’ll double-book,” Corvid explained. “So I book things in [the Google Calendar] and I’m well-organized and it’s on all my devices and I don’t screw up.”

The calendars that Corvid shares with Bob and Bunny enable transparency, because, as she told the Daily Dot, everyone knows what to expect from each other. “If I’ve just been over to Bunny’s for an evening of kink, then I might not be ready for vigorous exercise, like a challenging hike, with Bob afterwards,” she explained. People can’t solve a social problem, like cheating or just being inconsiderate, with technology, she continued. But it truly helps when people have many tools as their disposal to communicate. For a poly couple, that includes how their time is being spent.

There is also the reality that non-monogamous relationships sometimes have struggles with jealousy. While most shared calendars allow users to fine tune who gets to see what, Corvid chooses transparency with both her partners because she believes that, in any relationship but especially in a relationship that tends to be more complicated, openness is a good basis for communication. This complete transparency with each other, Corvid explained, builds trust.

Amanda is dating partners more casually right now and isn’t at the stage yet where she’s ready to make it ‘Google Calendar official.’ “I hope to have that again with someone down the road,” she said. “It truly is a special kind of commitment.”