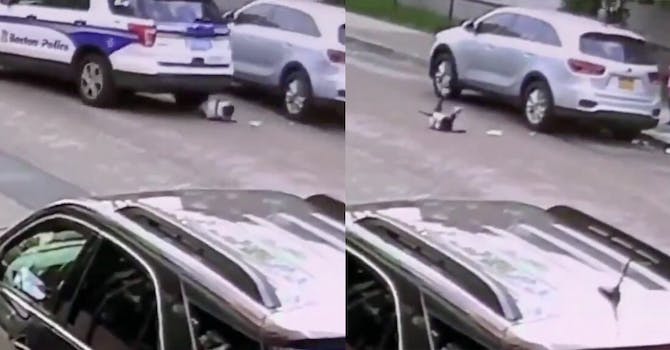 Police under investigation after running over 1-year-old child

A horrifying video has captured a Boston Police vehicle running over a one-year-old girl, who has reportedly sustained collar-bone injuries.

Surveillance video from the incident, which took place on Monday evening in Boston, shows the child emerging in front of the police car as it slowly pulls out of street-side parking. After the car pulls away, the one-year-old is seen tumbling out from underneath the car.

Boston police runs over a 1-year-old with a cruiser. As the girl recovers from a broken collar bone an investigation has been launched. pic.twitter.com/cqeivzuUK1

The girl suffered a broken collar bone, according to WBZ, and is “just asking for a speedy recovery,” her mother said.

Police are investigating to determine what happened, though according to Boston Police Commissioner William G. Gross, a preliminary investigation suggests it was an accident. He said such an incident is “any police officers’ worst nightmare.”

“She’s still recovering, and God bless her. From what we could ascertain, it’s definitely an accident, and we’re working with the family,” Gross said. “It’s just a tragic accident.”

A witness told WHDH that the officer behind the wheel was visibly shook: “He was very upset and you could tell he was in shock. I think he was crying.”

Mayor Martin J. Walsh says his heart goes out to the child. “When you see a little person get hit by a car like that, it’s horrible,” he said, according to WHDH.