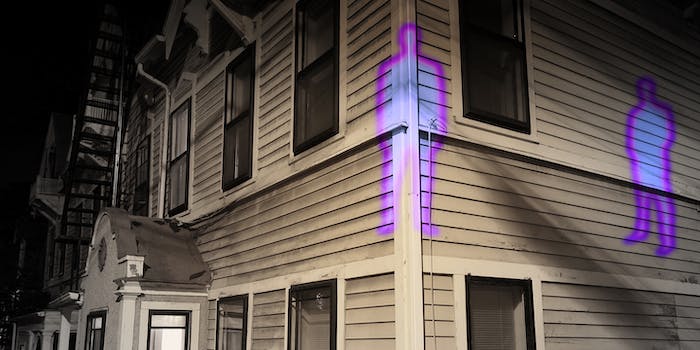 They can even see through the Fourth Amendment.

If you’re one of the many people alarmed about America’s top spy agency collecting all your cell phone metadata then you’re really going to hate this.

Law enforcement agencies across the United States have been secretly equipping their officers with an invasive radar tool that can “effectively peer through the walls of houses,” according to a report by USA Today. The handheld radars, originally intended for use by American soldiers in the Middle East, are now reportedly in the hands of at least 50 civilian police agencies.

No fewer than 200 of the devices, known as the “Range-R,” have been purchased domestically, says surveillance technology provider L-3 Communications, whose customers include the Federal Bureau of Investigation, U.S. Marshals Service, and Departments of Defense and Homeland Security.

Through the use of radio waves, the device, described as a “finely tuned motion detector,” is able to locate a person inside of a house, and can even detect human breathing from a distance of more than 50 feet.

Advanced versions of the radar system can be mounted on drones and provide law enforcement with three-dimensional mapping of a building’s interior. According to investigative reporter Brad Heath, who first broke the story, the Justice Department is currently funding research to further develop systems with these exact capabilities.

“The technology raises legal and privacy issues because the U.S. Supreme Court has said officers generally cannot use high-tech sensors to tell them about the inside of a person’s house without first obtaining a search warrant,” reported Heath.

While there is legal precedent in America’s highest court to bar the warrantless use of such scanners, it has done little in the past to deter police from skirting the court’s constitutional authority.

In a case raised by Heath’s report, U.S. Marshals employed the use of the Range-R to detect the presence a fugitive inside his home. While the suspect was lawfully sought for arrest, the agents passed on obtaining a search warrant, which is required before deploying a radar device to peer inside a private home. In a report, the arresting deputy wrote only that the service had “developed” reasonable suspicion to enter the house, neglecting to mention the Range-R’s use.

“You’re telling the bad guys along with everyone else.”

The U.S. Marshals Service has encouraged local and state law enforcement agencies to conceal the use of surveillance technologies in the past, USA Today reported.

For example, an email from a senior Florida police officer—later obtained by the American Civil Liberties Union (ACLU)—ordered subordinates to lie about the use of a controversial cellphone-monitoring device, known as a Stringray. The officers were told instead to claim intelligence was obtained from “a confidential source.”

Use of the Stingray device was to hidden, the officer’s email stated, “at the request of the U.S. Marshals.”

A former supervisor at the Marshals Service told USA Today that the agency knew better than to disclose the use of surveillance technology, such as the Stingray and Range-R, because “you’re telling the bad guys along with everyone else.”