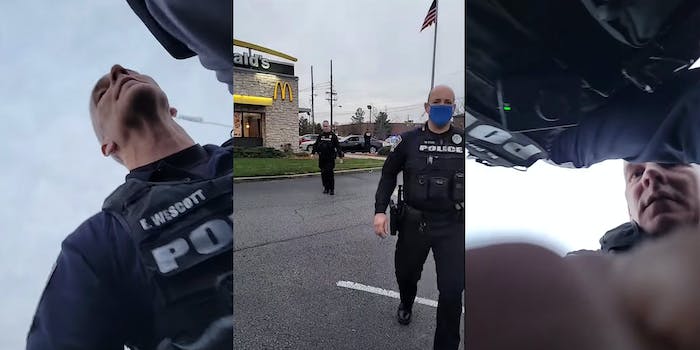 The man live streaming the police said, "This might be the most boring live video ever," and then it wasn't.

A man who was filming an arrest outside a Louisville, Kentucky-area McDonald’s was struck by a police officer—and is now facing charges of menacing and resisting arrest following the incident.

The case involves Joseph Bennett, who saw five Jeffersontown Police vehicles pulling over a car at a McDonald’s in the Louisville suburb. Bennett started a Facebook live stream from a position across the street, claiming that he was doing his “due diligence as a citizen to watch things” in recording the police interaction. He adds that he’s not going to “move or approach” the officers.

The excerpt of the live stream including the confrontation with the office was posted to the Reddit r/PublicFreakout subreddit on Friday, with the headline, “These cops don’t like to be recorded.”

Ironically, about two minutes into the nearly 4-minute video on Bennett’s Facebook page, he notes, “This might be the most boring live video ever.” About 45 seconds later, with his camera trained on an officer standing next to a police car with its lights flashing, Bennett adds, “I know it’s a little hard to see; I’m trying to stay away so I don’t get involved. I ain’t tryin’ to piss off the police or nothin’. I’m just watching. Didn’t see a need for five police cars to be pulling someone over.”

Then, at the 3-minute mark, two police officers walk quickly toward Bennett. One asks Bennett for his ID, and when he asks why, the officer says, “You’re filming a crime scene investigation, and you’re involved.”

The officer repeats, “And you’re involved.”

Bennett denies involvement, but the officer insists, saying, “Sir, I need your ID.”

Bennett calmly says, “I refuse to give you my ID.”

That’s when the officer’s hand became visible in the feed, grabbing for Bennett’s phone. A scuffle commences, and though it’s unclear in the video what happens, Bennett clearly asks, “Why are you hitting me?” while continuing the live stream.

The stream ends with an image of one of the officers, with the name “E. Wescott” clearly visible on his police vest, standing over Bennett.

According to a report from Spectrum News 1, accounts from Bennett and Jeffersontown Police as to what happened diverge significantly.

Lt. Col. Steve Schmidt of the Jeffersontown Police Department told reporter David Guildford that the arrest involved a check fraud scheme at a bank near the McDonald’s. Schmidt claimed that one of the detained suspects Bennett was filming claimed that Bennett was the driver involved in the criminal activity.

The citation against Bennett also characterized the strike from the officer as an “open strike.”

Bennett, though, characterized it as a “solid left hook” requiring an EMT to examine his injuries at the scene and a doctor’s visit in which X-rays were taken the following day.

Schmidt did clarify that Bennett is not a suspect in the check fraud scheme despite the detainee’s accusations. Bennett, voicing his concern about the incident, told Guildford, “They should have approached me gently. I wasn’t going anywhere, I wasn’t in my vehicle, I wasn’t gonna flee. They certainly shouldn’t have hit me first and asked questions later.”

Bennett has been encouraging those viewing the video on Facebook to share it where they can to raise awareness of the video, and while some commenters have shown support and raised outrage on his behalf, one Facebook friend saw irony in the video, wryly commenting, “Sometimes the arrest you stream will be your own.”