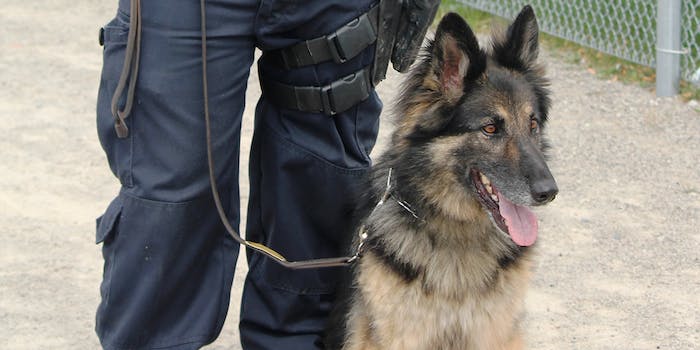 Knowing what your rights are is the best way to protect them.

In a 6-2 decision, the U.S. Supreme Court ruled on Tuesday that police officers who prolong traffic stops without just cause are in violation of the Fourth Amendment.

The justices concluded in the case of Rodriguez v. United States that police had violated the civil rights of Denny Rodriguez by making him wait while a drug-sniffing dog circled his vehicle without probable cause. Rodriguez, who was pulled over for driving erratically, was ultimately arrested after the dog, Floyd, led officers to a large bag of methamphetamine in the car.

“The police abuse of that authority and of your rights is going to have to be settled later.”

Tuesday’s decision means that police may not hold you during a traffic stop beyond the amount of time it takes to write you a ticket, as long as the officer has no “additional reasonable suspicion” of a crime, says Ezekiel Edwards, director of the Criminal Law Reform Project at the American Civil Liberties Union (ACLU). If the officer does unnecessarily prolongue the stop, it constitutes an unreasonable seizure—a violation of the driver’s constitutional rights. The use of the drug-sniffing dog in Rodriguez is but one illustration of how such a violation might occur.

So what, if any, substantive effect does the high court’s decision have during an actual police encounter?

With the expert help of the ACLU’s Edwards, we’ve put together a comprehensive guide—none of which is meant as actual legal advice—for what to do if you’re pulled over and the police want to bring out the dogs.

So you’ve been pulled over

If you’ve been pulled over by a police officer for a traffic violation, he may ask to see your license and registration and proof of insurance. Provide him with the documents, but keep your hands in sight. If you’re not at an international border, where your rights are different, or being questioned by an immigration agent, you don’t have disclose what country you were born in or whether you’re a United States citizen.

Absent probable cause, the officer cannot legally detain you for any longer than it takes to address the purpose of the traffic stop. He might question you about why you were pulled you over, or inquire about your destination. You have the right to remain silent. If you wish to invoke it, let the officer know. If you don’t know why you’re being detained, you have the right to ask.

Once the officer has issued you a citation or warning, ask him if you’re free to leave.

The police want to search your car

If the police have probable cause to search your car, they don’t need your permission. “Absent suspicion, the police can search your car only if you consent to a search,” says Edwards. Most attorneys would advise that you politely refuse the request. Regardless of how the question is phrased, if an officer asks if he can let a drug dog sniff around your car after you’ve been given a ticket, he’s asking your permission to continue detaining you. If you intentionally and voluntarily say yes, and the dog signals to the officer that there may be an illicit substance inside, he will have probable cause to search your vehicle.

If wish to refuse a search or you don’t want to consent to have your car sniffed by a drug dog, say so loudly and clearly, and then ask for permission to leave, Edwards recommends. If he says no, and your traffic violation has already been fully addressed, then it’s likely you’re being unlawfully detained.

Remember: the Rodriguez ruling did not outlaw the use of drug-sniffing dogs, only prolonging the traffic stop to use them. One police officer could still walk a dog around your car while another issues you a ticket. As long as it doesn’t extend the duration of the stop, they’re in the clear.

The police won’t let you leave

Unfortunately, if your rights are being violated, there is little you can do about it in the moment. A good attorney will tell you that challenging the officer’s authority in any kind of threatening way or just driving off because you’re legally entitled to isn’t your best option. “Indeed,” says Edward, “it is probably your worst one.”

“The advice is to comply,” says Edwards. “Even when the cops are violating your rights, outrageous as that is, people should not aggressively challenge the cops’ authority in those circumstances. The police abuse of that authority and of your rights is going to have to be settled later.”

They’re using a dog without my consent

“In many ways, police are going to do what they’re going to do,” Edwards says. “If you are arrested and charged with a crime, you would have to raise their violations of the Constitution in the context of your defense by challenging the lawfulness of your arrest or to suppress any evidence seized as a result of such violations, and could eventually try to hold them accountable in a civil lawsuit for money damages.”

All is not lost, however, and there are proactive steps you can take.

It may be difficult in the moment, but there are several factors you should try to focus on, particularly the time. When did you get stopped? How long did it take them to write the ticket? When did the stop end? How long did you have to wait when they were bringing the dog? Additionally, you have the right to ask the officers for their badge numbers.

The dog found my drugs

Whether the search was legitimate or not, you’re probably going to jail now. It’s crucial at this juncture you remember that you don’t have to answer any interrogating questions. Call your lawyer or request one when you’re arraigned.

“There are seizures of contraband everyday that are in violation of the fourth amendment,” says Edwards. “Unfortunately, in those circumstances, you can’t do anything about the fact that they’ve now found drugs or now put you in handcuffs. What you’re going to try to explain to the lawyer who is defending you is that they have an argument to suppress the drugs, and without the drugs, there’s nothing to charge you with.”

They falsified evidence against me

One consequence of the war on drugs is that some police officers have abused their authority in the context of searches. Unofficial arrest quotas, such as those disclosed by former officers in New York City, have incentivized the practice of planting narcotics on innocent people to facilitate arrests. Likewise, cops may erroneously claim they had probable cause to perform a search when none existed.

“The police need to be, more than anybody, comprehensively, effectively and consistently trained in what the Fourth Amendment is.”

“There are things one can try to do to protect their rights in the moment, but if a police officer is dead set on violating those rights and lying about what happened, then you’re going to have to fight that out in a legal setting,” says Edwards. “Sometimes you can be vindicated and sometimes not. It’s not an ideal situation. Again, you should always make clear that you know what your rights are, ask the police for explanations about what they’re doing, get badge numbers, and there’s the right to record police as long as you’re not interfering with their work.”

One hope is that the adoption of on-officer body cameras will help curb police abuse. The devices come with a deluge of privacy related issues, which lawmakers are currently debating in several states, but they are slowly becoming the norm in several major U.S. cities.

In the end, Edwards says, making sure police are well-trained and work well within the community is the primary way to ensure your rights are not violated.

“The police need to be, more than anybody, comprehensively, effectively and consistently trained in what the Fourth Amendment is,” he says. “They need to know when they can and can’t stop you; when they can and can’t continue holding you; and that, if somebody refuses to give consent to a search, they have to abide by that refusal, assuming they don’t have any other suspicion.”