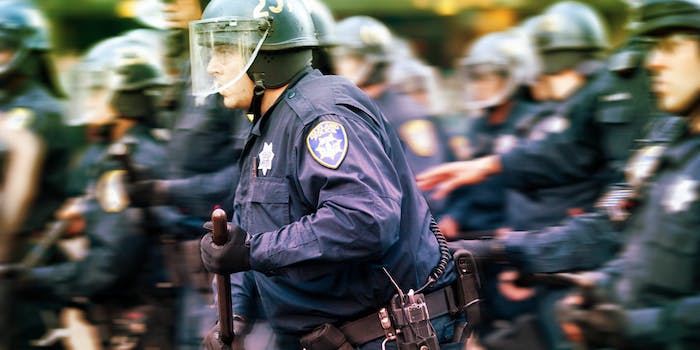 This database is tracking police brutality across the U.S.

More than 85,000 cops have been investigated for misconduct over the past decade.

Police brutality is being documented more frequently, thanks to quick access to technology and social media. But beyond anecdotal instances and evidence collected through cellphone videos, there hasn’t been much in the way of comprehensive data on police misconduct across the country. Until now.

The USA Today network, in collaboration with the Invisible Institute—a Chicago-based journalism organization that also runs Citizens Police Data Project, which records the city’s police brutality instances—launched a database that includes records of 85,000 cops who have been investigated for misconduct over the past decade. According to the records, more than 30,000 former officers have been banned from the police force in the U.S.

USA Today, with its affiliated nationwide networks, spent over a year collecting data on police misconduct across the country, an issue that often remains underreported or is shoved under the rug by police departments.

“Police unions and their political allies have worked to put special protections in place ensuring some records are shielded from public view, or even destroyed,” reads the USA Today report, highlighting the need for a comprehensive database that exposes both police misconduct as well as departments’ unwillingness to hold their members accountable.

They found a total of 110,000 internal affairs investigations across different departments in the U.S. and a shockingly low number of cases where cops faced appropriate consequences for their misconduct or abuse. Baltimore Police Department, which is often in the news for its officers abusing their privilege, revoked certifications for only four officers in the past decade. Meanwhile, the report says departments in Florida and Georgia have decertified thousands, regardless of the level of their crimes.

In the database, police crimes include drunk driving, domestic violence, child molestation, and tampering with evidence. One of the highest instances of misconduct was officers’ use of excessive force, at 23,0000—which records show African-Americans are most likely to be victims of.

“Officers are public servants. They police in our name,” Seth Stoughton, a law teacher at University of South Carolina and a former police officer, told USA Today, adding that there is a “strong public interest in identifying how officers are using their public authority.”

In its report, USA TODAY reiterated its plans for the database: “to publish many of those records to give the public an opportunity to examine their police department and the broader issue of police misconduct, as well as to help identify decertified officers who continue to work in law enforcement.”

The database is available here.