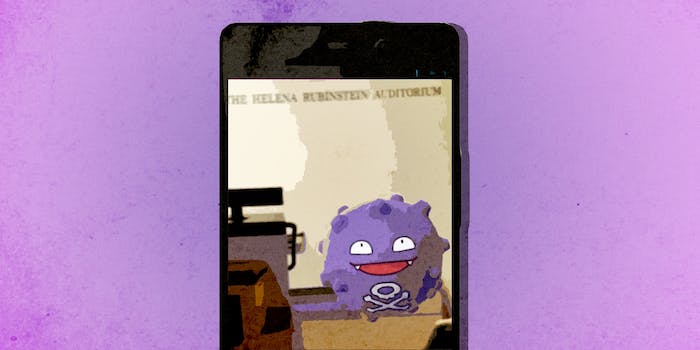 The museum is asking to be excluded from the game.

Since its launch, people have been playing Pokémon Go 24/7.

Well, apparently one museum in Washington, D.C., didn’t get the memo.

In a 4chan joke come to life, one Pokémon Go user showed a Koffing—otherwise known as a Pokémon who emits poisonous gas—located around around the D.C. museum’s Helena Rubinstein Auditorium.

According to the Washington Post, the auditorium shows the testimonials of Jews who survived the gas chambers.

SOMEONE FOUND KOFFING IN THE HOLOCAUST MUSEUM IM DEAD pic.twitter.com/2v35SToUua

While some speculate that the image may be fake, Andrew Hollinger, the museum’s communications director, told the Post that they are concerned with Koffing’s appearance.

“Playing the game is not appropriate in the museum, which is a memorial to the victims of Nazism,” Hollinger said. “We are trying to find out if we can get the museum excluded from the game.”

Since Niantic, the software company that developed the game, hasn’t yet responded to the museum’s request to stop having Pokémon inside their building, some eager users are still on the hunt to catch ’em all.

According to the Post, the journalist who went to the museum said she found many users playing Pokémon Go upon arrival, including one who attached a lure module—an item that attracts Pokémon to a specific Pokéstop—to the museum.

The player behind the lure was reportedly 30-year-old Dustin, who declined to share his last name with the Post for privacy reasons. He was allegedly hoping to catch a Krabby Pokémon while waiting in the museum’s lobby.

“It’s not like we came here to play,” Angie, a friend of Dustin, said. “But gotta catch ’em all.”