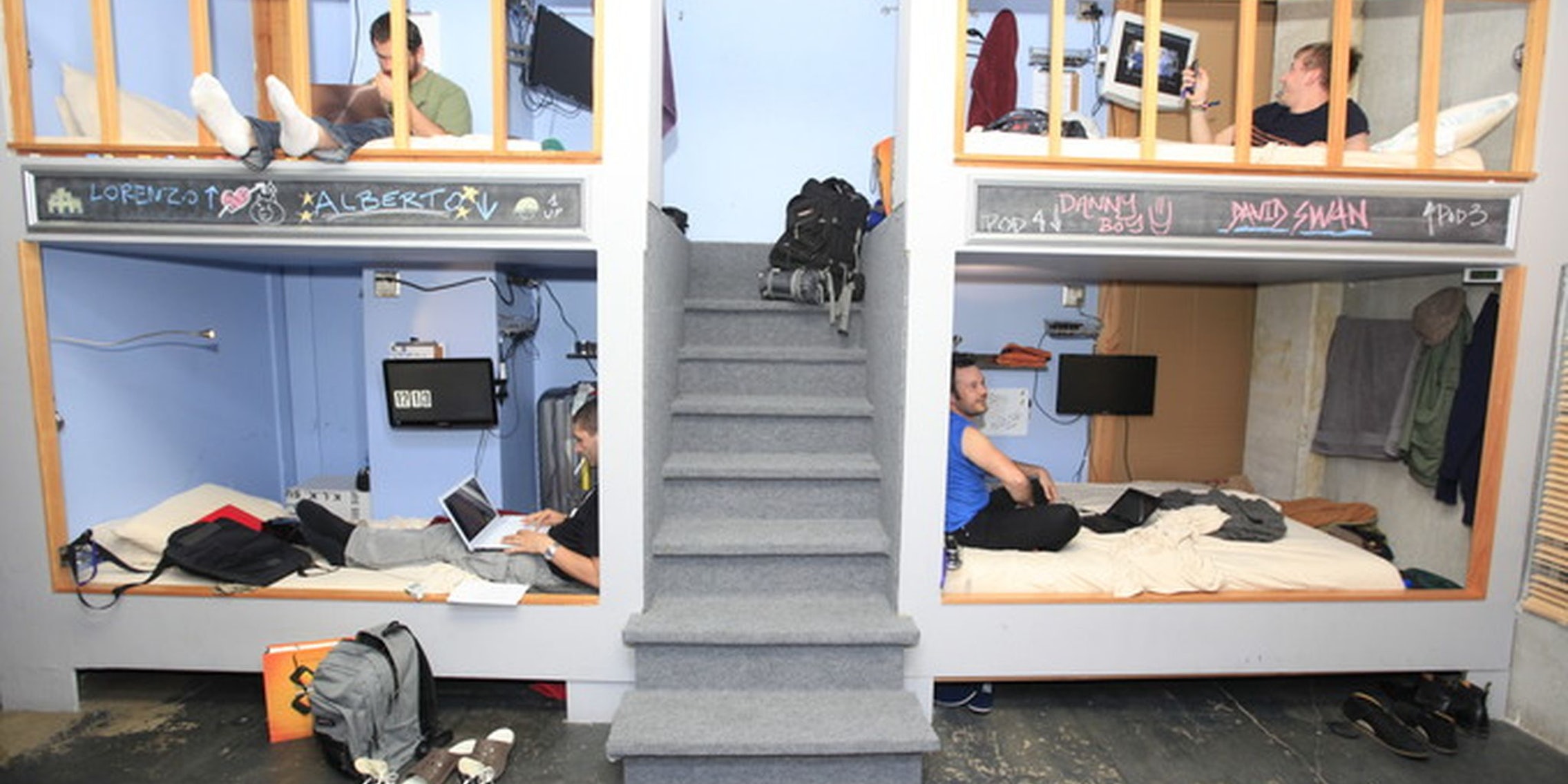 PodShare is not a cult, but it is weird

Do you dare co-sleep in your co-working space?

There is no I can’t. There is only I don’t want to.

That’s what it says on a sticker gingerly placed atop my memory foam mattress at PodShare, a new co-working and co-living space in downtown Los Angeles.

But when I go to lie down, the sounds of passing motorcycles and the blare of a tram are too overwhelming for me to relax. The sticker is a lie: I want to sleep but I can’t. 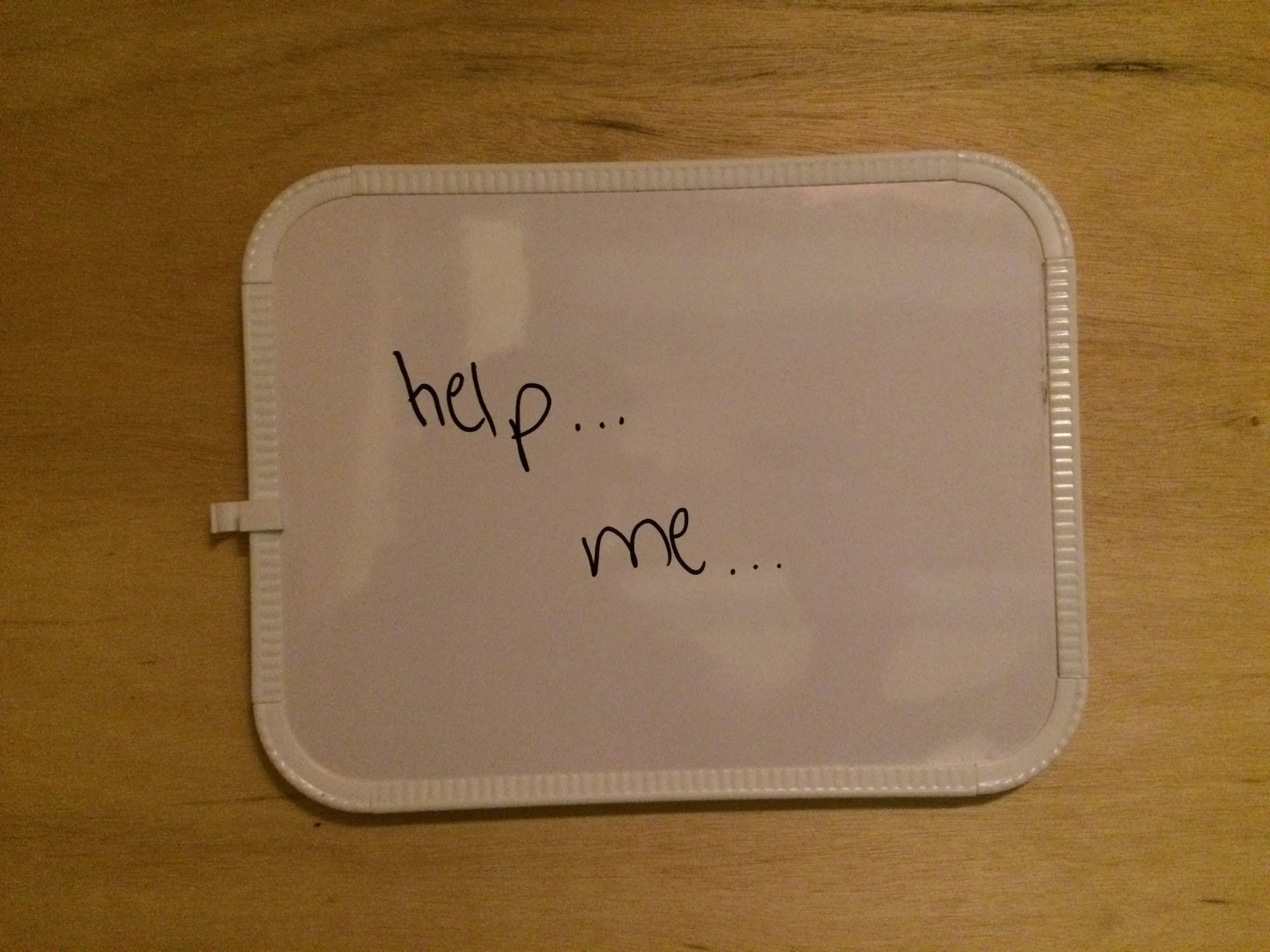 “Help…me…” I write on a whiteboard, conveniently offered to all guests above their beds. (I’m later told these are for writing inspirational quotes, at which point I erase my plea and write a famous Britney Spears quote, “I don’t like defining myself, I just am.”)

To be fair, though, if you’re the type of person who can absorb a quote from Instagram and become a vessel for its specific brand of Zen, you might actually really like the PodShare, which, in some ways, feels more like a commune or a modern kibbutz than a hostel—minus the endless meetings about compost duty.

There’s just one rule: No sex in the bunks.

Here, everyone writes their name in chalk on a board next to their bunk and is introduced to new “Podestrians”—PodShare code for hostel guests—as soon as they walk in the door. Elvina Beck, the Russian-born entrepreneur behind the co-working and co-sleeping space, says in a YouTube video that her overarching mission is to “end world loneliness.”

At PodShare, which costs just $35 a night, $225 a week, or $900 a month in its downtown location (there is also a Hollywood one), visitors don’t just sleep in the same room—they also go out to party together and then get brunch the next morning. They trade tips on apartment hunting and e-commerce. “They even fall in love,” Beck says.

There’s just one rule: No sex in the bunks. 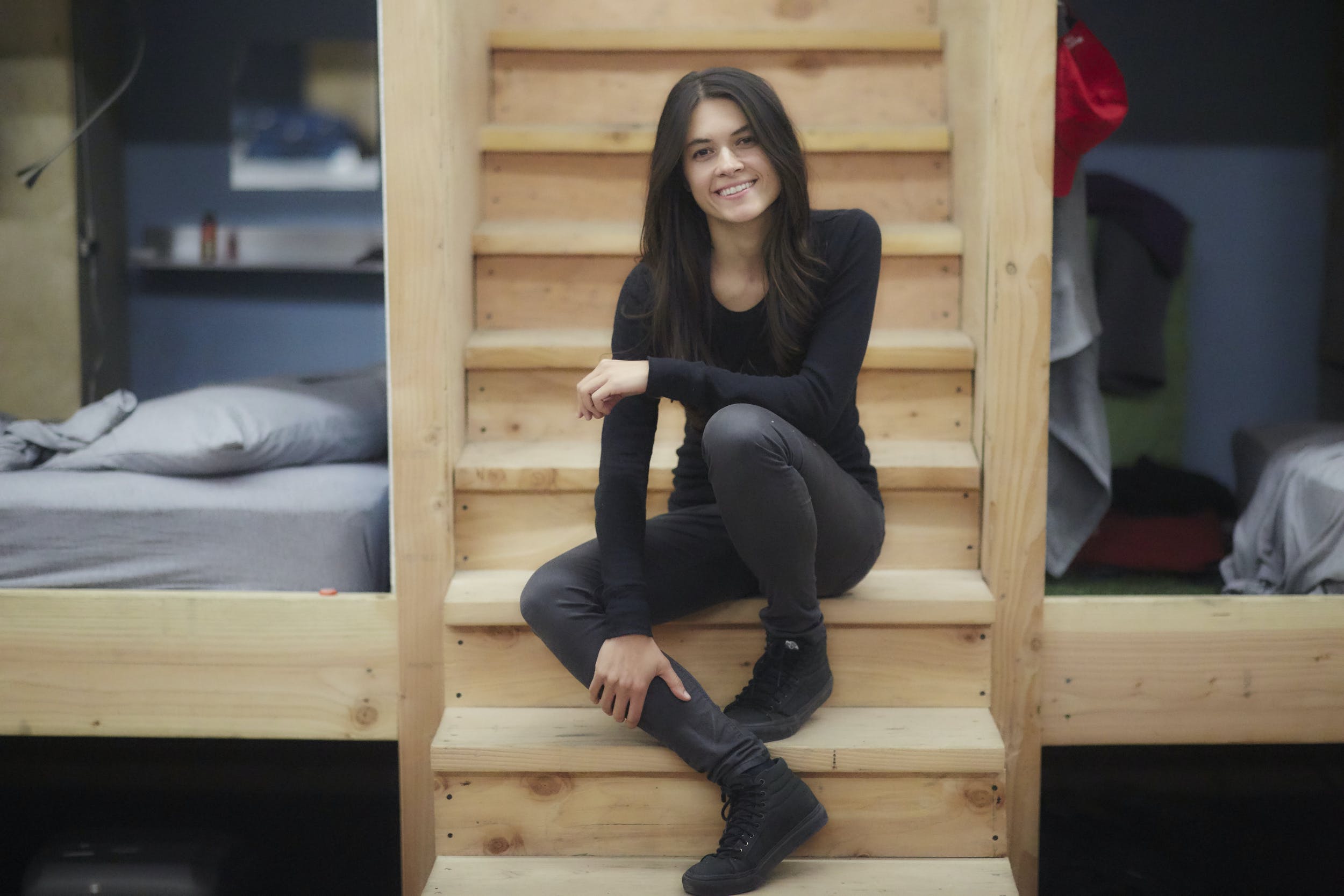 Beck went to Pepperdine, a dry campus in Malibu, where she was appreciative of the university’s lack of hookup culture. Since 2012, she’s observed the no-sex rule herself, sleeping in a pod alongside her visitors without ever getting intimate with someone else in the presence of other Podestrians—not even with a sheet teepee.

“What about privacy?” I ask her at one point. “Don’t you ever want to be alone?”

Kera Package, PodShare’s chief of operations, answers for her. “Elvina needs a lot of attention, not space.”

Beck shrugs. “Some people get worn out by others, but I love talking to people and being around people,” she tells me. “If I want to have sex, I just go to [my date’s] place. But when you date me, you have to share me with 18 other people.”

This kind of constant social interaction might strike some as anxiety-provoking. We are social beings, but are we really that social?

Research suggests that open office floor plans make employees frazzled and despondent. But Beck is an open book, and she believes others want to be, too—they’re just searching for the right environment to bloom.

Indeed, without any sexual pressure, there’s something charmingly innocent and jocular about the environment on the day I arrive. The Podestrians I meet, who all happen to be in their early 20s, are wide-eyed and super friendly in a way that reminds me of freshman orientation—or, you know, a cult.

Everyone calls me by my first name, which makes me worry they’ve reached a certain level of co-working clairvoyance, until I realize “Steven” is written in chalk beneath my bed.

The idea is for your hostel bunk to also be your cafe, or “third space.”

After I’ve put my stuff down, Package gives me a tour of PodShare’s kitchen. “The milk is communal,” she explains, opening the fridge. “Other stuff isn’t, but no one is too attached to anything.” I make note of an intriguing energy drink. There’s also a shelf filled with cereal and other staples (peanut butter, jelly) that could keep a Podestrian adequately satiated without spending a penny.

Package then shows me the future of the PodShare experience: a murphy bed with a desk tucked under it that reveals itself when you give it a slight push upward. (A hydraulic arm does most of the heavy lifting.) The innovation could potentially transform every pod into working and sleeping compartments.

“Does the bed have a sensor so it doesn’t accidentally fling you against the wall?” I ask.

“It can’t flip when it has weight on it,” Package assures me.

The idea, Beck later explains, is for your hostel bunk to also be your cafe, or “third space.” Why spend money on a cappuccino and a hostel bed when you can sleep and work in one big room? 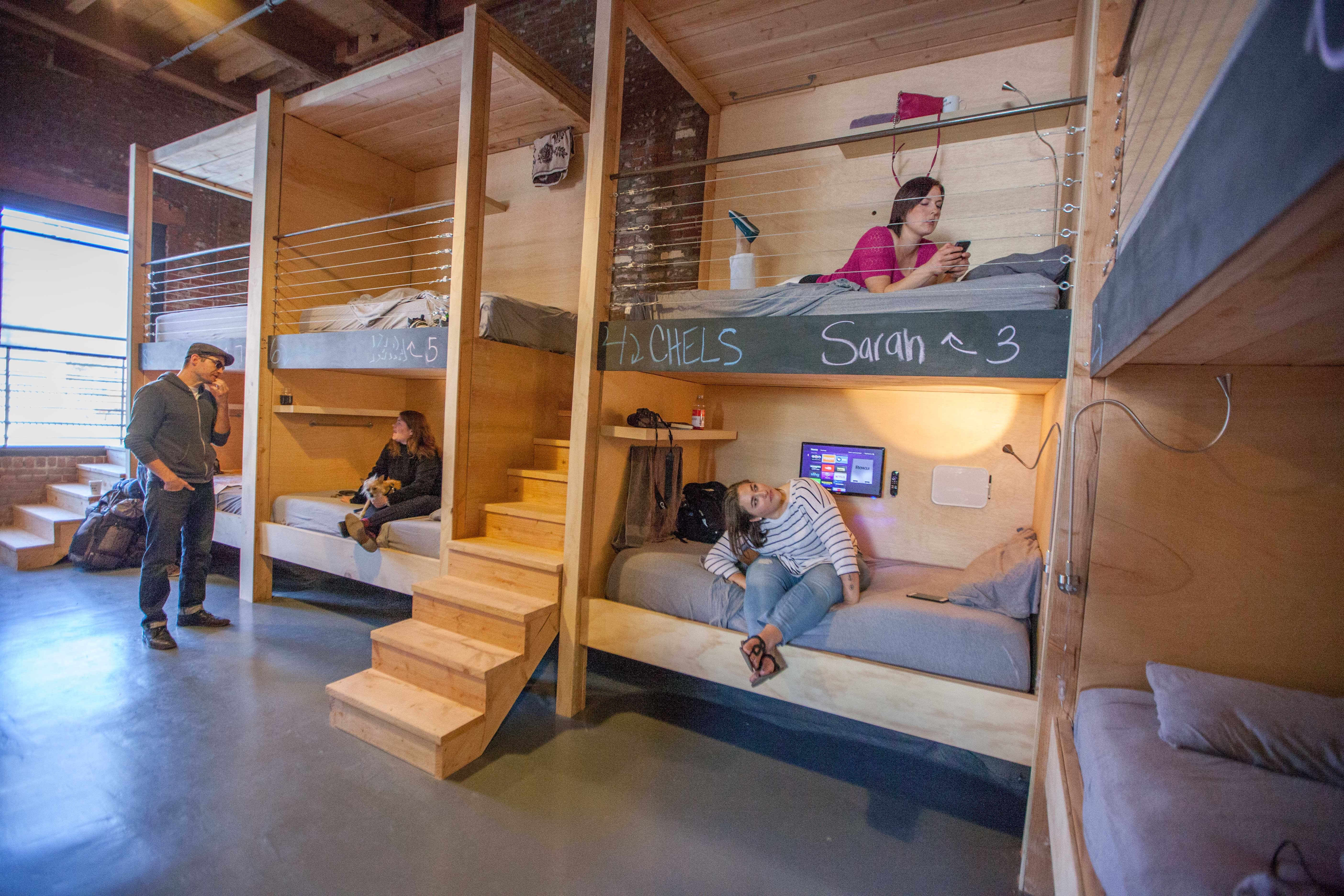 Beck’s broader ambition is to have multiple PodShares around Los Angeles so you can could work, grab a hot shower, and store your belongings in lockers across town. She plans to have a Los Feliz location open in June, and four more throughout the city soon after that.

Though you can already rent workspace in L.A. through companies like WeWork, it’s the combination of sleeping near—and networking with—one big group of people that makes PodShare unique.

And, boy, do these Podestrians network. While I’d initially thought the pod life might attract a budget-friendly clientele simply looking for a cheap place to crash, most of the visitors I talk to are e-commerce wizards eager to trade tips about how to make money online.

One sells jewelry on Shopify and talks up the EDM festival he just visited in Vegas. Another has a get-rich-quick eBook link in his Instagram bio and pictures of himself skydiving over Rotterdam. They tell me they chose PodShare because Airbnb doesn’t offer enough opportunities to network with other young, connected people.

In that sense, PodShare feels less like a chummy hostel and more like a downmarket SoHo House, the kind of place where very young entrepreneurial types can network with relative ease in a space with a shabby-chic game room and stainless-steel kitchen.

There are exceptions, of course. One guy I talk to is a 37-year-old software engineer who’s been sleeping at PodShare while he hunts for an affordable apartment.

Beck tells me that at PodShare’s Hollywood location, which has been open since 2012, the clientele has historically been very mixed. Anyone and everyone is invited to spend the night, though digital nomads might get more out of the experience.

For her part, Beck screens each guest to ensure they don’t let anyone in who could steal something or otherwise ruin the vibe. They require users to book a few days in advance, provide social media account links, and answer simple questions like, “Why are you in LA?” and “Have you ever lived in a community space before?”

“The layout of PodShare tends to discourage people who desire to do bad things from coming, so 99.9 percent of the time, Podestrians are awesome and welcome to extend,” says Package.

“I feel like I couldn’t be with someone because there’s so much candy around. This place is like a buffet.”

The company is also piloting a social booking system in which you’ll be able to see the country of origin and profession of your fellow pod mates.

“It’ll allow you to see who’s in which bunk so that you can say, ‘Oh, hey, would you look at that: There’s a Web designer staying here tonight. Maybe I can network with them?’” Beck says, a wild twinkle in her eye.

I ask Beck if she ever gets lonely, despite being constantly surrounded by new people. She admits she does crave the intimacy of a relationship. “Just the other night, I was really missing this guy I’ve been off-and-on dating,” she says.

She also says it’s hard to commit to someone when there’s a revolving door of young, attractive faces (who, again, you’re not supposed to have sex with). “At this point,” she says, “I feel like I couldn’t be with someone because there’s so much candy around. This place is like a buffet because you have so much variety.”

That said, she doesn’t seem unhappy with her situation and why should she be? According to one article, the PodShare location in Hollywood has a 92 percent occupancy, a 19 percent return rate, and more than 4,000 members who have stayed there over the past four years.

You get the sense Beck’s created something that millennial travelers truly crave: the creature comforts of an Airbnb with the social vibe of a hostel. It’s a revolution, in a way.

But if you fall in love at a PodShare, maybe don’t get a PodShare tattoo. It’s a bit much.