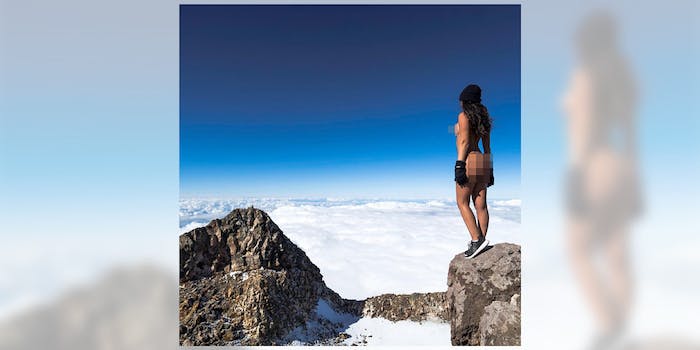 'It's like someone went into St. Peter's Basilica in the Vatican and took a nude photo.'

This weekend, Playboy model Jaylene Cook climbed an 8,200-foot-plus mountain in New Zealand sacred to the Maori people—and she did so naked. Now, she’s being criticized for her insensitivity to the Maori community.

Dennis Ngawhare, a spokesperson for the tribe near Mount Taranaki, told the BBC, “It’s like someone went into St. Peter’s Basilica in the Vatican and took a nude photo.”

Mount Taranaki is an active volcano and the burial site of Maori ancestors, with its crater and summit holding special significance. “The rocks and ridge are his bones, rivers his blood, and plants and trees are his cloak and offer protection from the weather,” the New Zealand Department of Conservation explains on its website.

In the photo, the 25-year-old model stands on its peak with nothing on but sneakers, gloves, and a beanie, facing away from the camera.

Earlier last year, Cook posted an Instagram photo of her topless in front of the Statue of Liberty with the caption, “Wouldn’t be a Jay Holiday if I didn’t get topless at at least one historical site.” She appears nearly naked in a majority of her Instagram photos, most of which are in nature.

“We simply ask people to please be respectful,” Ngawhare said of Cook’s photo. “This latest case is just another really annoying example where someone obviously didn’t know how to behave here.”

Amid the criticism, Cook defended herself, telling Stuff.co.nz: “[The photo’s] not crude or explicit in any way. We made ourselves knowledgeable on the history of the mountain. We were quite respectful. Being nude is not something that is offensive in anyway. It’s natural and pure and it’s about freedom and empowerment.”