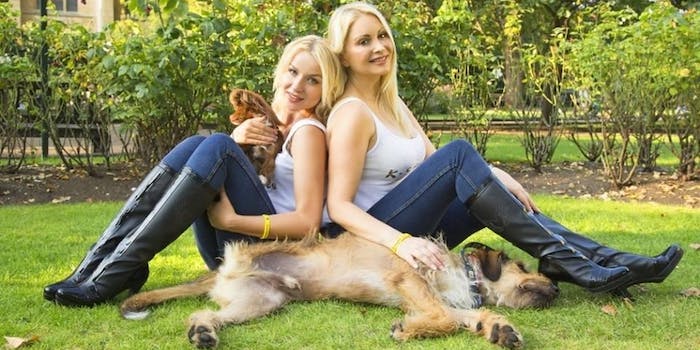 These models are on a mission to save stray puppies

The K-9 Angels are as beautiful as they are compassionate.

Is there anything better than the Instagram account Hot Dudes With Dogs? As it turns out, there is: hot ladies with dogs. That’s what we’ve learned from the new charitable organization the K-9 Angels, a group of models that’s devoted to saving stray dogs.

We have just found a stray red puppy in abandoned industrial area and named him after you @edsheeran ❤️#dogrescue pic.twitter.com/Zb8BvRANCC

This trio of blondes doesn’t just playfully pose with happy pooches. They save their lives by delivering them from harsh living conditions and matching them with suitable owners.

The group is not just a gimmick. Founded in November 2011 by Pola Pospieszalska, TV personality Anneka Svenska, and former Playboy model Victoria Eisermann, the K-9 Angels have managed to place over 700 helpless pups in permanent homes.

So how did these Angels get their wings? It wasn’t until Svenska came across a photo on Facebook of a dog clinging to life on the streets of Romania that she realized something needed to be done. Inspired by this brave animal, Svenska co-founded the charity along with her two friends, naming it after Angel, the same dog she saw struggling to stay alive.

We met Beautiful Poppy 11 months old 2nite and she is for adoption – contact @themayhew for details.. RT everyone :-) pic.twitter.com/CbuFWaXApc

Since the group’s inception, the K-9 Angels has taken quite the stand against animal cruelty. The group’s main focus has been the Romanian government’s 2013 “killing law” that made euthanasia legal to combat the growing stray dog issue.

“It is common in Romania for them not to use a euthanasia injection, but instead dispose of dogs in cheaper ways such as injecting paint thinner into the heart, strangling, clubbing to death,” Pospieszalska told the Daily Mail.

Nelson rescued out of public shelter in #craiova is up for adoption #AdoptDog !! ❤️ pic.twitter.com/pJcw4z50XZ

In addition to rescuing hundreds of dogs from brutal Romanian shelters, the K-9 Angels has also taken a political stand. Last year, the group managed to obtain 28,000 signatures for a petition that called on the European Union to explore the disappearance of public funds in Romania allocated for spaying and neutering.

“Our mission is to improve the quality of existence of our canine friends from all over the globe as well as educate people about animal welfare,” the Angels proudly proclaim on the site.

Currently the group is active in Romania, Cyprus, the United Kingdom, and Thailand. But the ladies plan to expand their efforts to serve animals struggling all around the world. H/T BroBible | Photo via TheK9Angels/Twitter