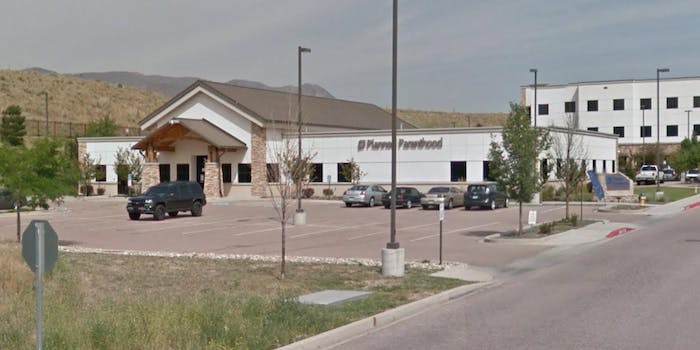 Police are still combing over the facility to investigate 'devices' that the suspect left behind.

Police in Colorado Springs, Colorado, detained a man who opened fire at a Planned Parenthood clinic on Friday, wounding 12 people and launching a five-hour standoff.

Three of those victims, one of them a University of Colorado police officer, have passed away, police said. Five of the wounded are officers and the other four are civilians.

The shooter surrendered to police shortly before 5pm MT.

Lt. Catherine Buckley, a Colorado Springs Police Department spokeswoman, said at a briefing earlier Friday that the man had brought “devices” with him to the clinic that police would need to evaluate before declaring the situation over. “Until we get up there to check out those items and [determine] what they are,” she said, “we can’t say what they are.”

Adjacent buildings remained locked down, with civilians inside, as police swept the clinic and the surrounding area to locate and secure the shooter’s “devices.”

Reports had circulated on social media about the shooter possibly opening fire at a nearby Chase Bank branch, but Buckley debunked them, saying, “This incident did start at the Planned Parenthood building.”

Asked whether police could identify a motive for the shooting, given its politically sensitive location, Buckley said at the post-surrender press conference, “To even speculate on a motive would not be reasonable.”

She added that the clinic was an active crime scene and that a full resolution could take several days.

Under a newly passed Colorado law on officer-involved shootings, the El Paso County Sheriff’s Office will take over the portion of the ensuing investigation related to officers’ contact with the shooter.

“We hold the Colorado Springs community in our thoughts and prayers,” Colorado Gov. John Hickenlooper said in a statement released just before the shooter surrendered. “The bravery and courage of local law enforcement officers have prevented a dire situation from being far worse, and we are all grateful. We are in contact with [Colorado Springs] Mayor [John] Suthers. All state Public Safety resources are at the ready, if and when needed.”

In the third hour of the standoff, police began escorting civilians out of the area, evacuating them in hardened tactical-response vehicles before transferring the wounded to ambulances. Police said they evacuated approximately 20 people.

Police and tactical units switched to cell phones as they coordinated an assault on the facility, avoiding the regular scanner feed that is publicly available.

The shooter, described by local station KTTV as wearing a long coat and a hunting hat, quickly barricaded himself inside the facility. KTTV 11 reported that the first officer to be shot was hit in the hand.

Buckley declined to provide specifics on the shooter’s weapon, only calling it a “long gun.”

Federal, state, and county law-enforcement agencies—including the Federal Bureau of Investigation and the Bureau of Alcohol, Tobacco, Firearms and Explosives—responded to the shooting. Buckley said at her first briefing of the day that the various agencies had “brought all of our resources to bear” in responding to the shooting.

Penrose Hospital, which is three miles south of the clinic, said on Twitter that it had received six wounded patients. The University of Colorado’s Memorial Hospital received three patients.

“We were looking out the window and we had an officer wave us back inside,” Brigitte Wolfe, an employee of a Japanese restaurant located next door to the Planned Parenthood facility, told the Denver Post. “They have everything blocked off.”

Just saw someone being put into an ambulance. @FOX21News Not sure who. pic.twitter.com/HrrKrvCdPI

While neither the motive nor the identity of the alleged shooter is yet known, the Colorado Springs facility is not the only one to be targeted in recent months. A Planned Parenthood facility in Thousand Oaks, California, caught fire in September. Investigators determined the source of the blaze to be arson.

A few weeks prior to the Thousand Oaks fire, another Planned Parenthood building, this one in Pullman, Washington, burned overnight in an attack that was also deemed to be arson.

“The FBI has been in close communication with [abortion] providers over the past 20 years,” Lauren Anderson, who led the FBI office at the U.S. Embassy in Paris from 2002 to 2006, told the Daily Dot.

“Since the release of the highly doctored video by the [Center for Medical Progress] this summer, the FBI has stepped up its communication with providers around the U.S.,” said Anderson, who led the FBI New York Joint Terrorism Task Force’s international terrorism program after returning from Paris. “There’s been arsons in California, Washington, Louisiana, and Illinois just since the release of the video this summer.”

Gunmen have opened fire at Planned Parenthood clinics several times before. During a 22-month time span in the early 1990s, there were three fatal shootings at the organization’s buildings.