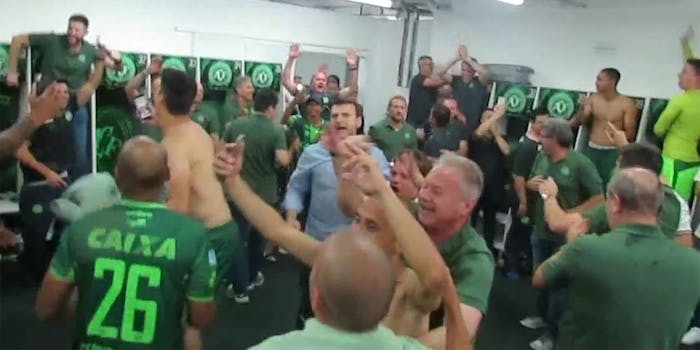 The Chapecoense Real were on their way to a soccer championship.

A charter plane carrying a Brazilian soccer team on its way to a championship game crashed in Colombia Monday night, with 76 people confirmed dead.

The plane, which was en route from Bolivia to Colombia, declared an emergency stop near Medellín’s airport at 10pm local time (9pm CT), citing electrical failure, but it crashed about five minutes later. Seventy-two passengers were confirmed onboard, including 22 members of the Chapecoense Real soccer team—which was traveling to play its first match in the finals of Copa Sudamericana, an international soccer tournament in South America—and 22 journalists.

Initial reports indicated that 75 people died (including crew members) and six had survived, but rescue efforts throughout the night have been complicated by heavy rain. The survivors, according to Colombia’s aviation authority, included three soccer players (one who later died), two crew members, and a Brazilian journalist. An additional survivor had been discovered at approximately 5am Tuesday morning, according to a local Colombia television station.

Chapecoense Real had posted a Facebook live video earlier in the day of the team checking into the airport.

Already a rising force in Brazilian soccer—having joined Brazil’s first division in 2014 and coming off wins against tough opponents in recent weeks—the team was ecstatic to travel to Medellín.

“What was supposed to be a celebration has turned into a tragedy,” Medelín Mayor Federico Gutierrez told CBS News.

In a Facebook post, Chapecoense said (according to a translation from Portuguese) that it would not comment further until more details were available, adding, “May God accompany our athletes, officials, journalists and other guests traveling with our delegation.”

Brazilian President Michel Temer declared three days of national mourning for those who died in the plane crash, while the soccer community around the world is sending their condolences.

My thoughts and prayers go out to all the families affected by the terrible tragedy today in Colombia. @ChapecoenseReal #Prayforchapecoense pic.twitter.com/8s5rwHTeKi

A photo of the Chapecoense players who weren’t on the flight has also started to circulate online. The devastation on their faces says it all.

On Tuesday morning, Chapecoense Real re-posted a video of a recent locker room celebration, captioning it, “This is the last image of our warriors.”

This is a developing story.